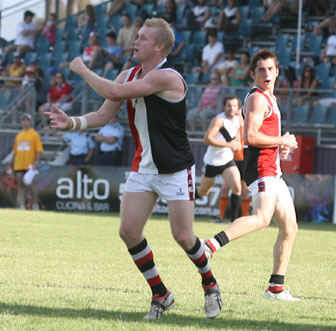 Gun midfielder David Lillico is set to return this season despite undergoing an April knee reconstruction in a huge boost for Morningside.

Champion Morningside midfielder David Lillico is set to make a shock return to QAFL playing ranks before the end of the season.

The 30-year-old tore his anterior cruciate ligament in Alice Springs in Round 3 and underwent a knee reconstruction, but was able to opt for the radical new LARS surgery that can have players back on the field in three months.

A trim-looking Lillico ran the water for the Panthers during their big win over the Brisbane Lions last weekend and coach John Blair is optimistic about his prospects.

“In all likelihood there is a strong chance that Lillico will play again this season,” Blair said.”He’s back running and doing things.

“He’s reasonably well advanced – as advanced as what the medical people will let him be at this stage and that’s a good sign.”

Lillico’s misfortune was the start of a spate of injuries of other issues that saw the Panthers playing stocks severely tested, yet they have never dropped out of the top three.

“We knew we had a pretty hard month after the State game with so many of our players involved in rep footy, losing (Paul) Shelton overseas, (Ryan) Holman to an event in Melbourne and (Nathan) Kinchy to a wedding last week,” Blair said

“All those things hurt us. It led to instability in our line-up.

“We’re starting to get them all back now and we should definitely be more stable from here.”

The massive bonus for the triple premiership coach has been that a number of players who have held mid-tier roles have stepped up with A-grade performances.

Tyson Upton, Mark Rootsey, Damien Bonney, and Alistair Nash have been outstanding in the midfield, while beanpole youngster Tom Hickey has shown some positive signs since being blooded at senior level.
.
“We’ve always had a saying here that someone’s misfortunate is someone else’s good luck,” Blair said. “If someone is out injured it means someone has had the luck to get that spot.

“We keep force-feeding them to be ready for the opportunity, and to take the opportunity. So far those blokes have been able to do that, so that’s good.”