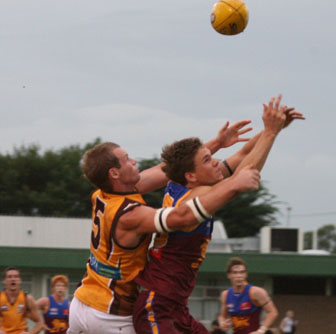 Aspley’s experienced defensive unit has made a serious impression over the last month but it faces a huge test from Mt Gravatt.

Aspley’s new defensive ‘wall’ will be put the litmus test when they host Mt Gravatt at Graham Road on Saturday.

The most impressive part of the Hornets’ game over the past month has been the work of the backline, which has conceded just 11 goals per game.

It will have its hands full with a Mt Gravatt outfit that hit top form last week, although Aspley skipper Robert Copeland is looking forward to the clash.

Copeland has played the best football of his 18 months back in the QAFL over the recent stretch, marshalling the defence alongside fellow seasoned campaigner Brent Evans.

With sturdy Tyson Hartwig and the versatile Matt Trewhella playing their parts, the Hornets have gone 2-2 over the past four rounds, with both losses more than honourable ones to the Lions and NT Thunder.

“They’ve played a fair bit of footy,” Copeland said of his backline compatriots. “Tyson has played in a good league and Evo’s got the experience. Then you get a couple of younger blokes around who we can help out.

“We jell together and listen to each other really well and it makes a hell of a difference when everyone does that.”

The Hornets ran the ball out of defence with plenty of system at Chelmer last week, and also scored goals from some set plays at around the ground bounces.

“We’re training to do that,” Copeland said.

Of his own form, Copeland admitted he was enjoying the regular role in the backline.

“My best footy is probably in defence. Being the most experienced player out there I’ve got to step up and help the blokes out around me,” he said. “It’s working well…always a defender – you never get that out of your blood.

“I’ve worked pretty hard over the years to manage what I do back there.”

Despite being longshots to sneak into the top five, Copeland is discounting the Hornets from anything.

“We’ve got six or seven games left to try and win as many games as we can,” he said. “The first part of the season was pretty hard on us but we’re just trying to carry on and keep things going.

“We’ve really got to knuckle down and hopefully roll Mt Gravatt. We have to play four quarters like we did last week. Lapses of five minutes here and there where good sides can kick three or four goals will hurt you.”