Lights switched on at Coorparoo 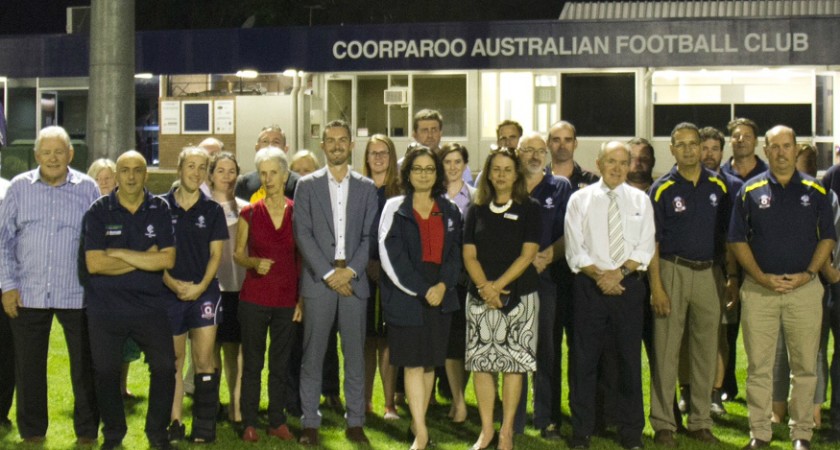 Coorparoo AFC has flicked the switch on a new era at Birubi St, showcasing their home ground’s brand-new floodlights on Thursday night.

The upgrades to the lighting on both fields at Coorparoo will permit the club to host regular night fixtures.

Coorparoo AFC Infrastructure and Funding Coordinator Dennis Bramadat was the driving force behind the initiative and says maintaining the venue is an integral tool in community development, a key value that the club prides itself upon.

“We provide a service to the community. With that service we need to provide a place where people can come to play improve their health and well-being,” Bramadat said.

“We’re looking into the future which means keeping this place growing, in good condition and developing the club and the wider community.”

Federal MP for Griffith Terri Butler has also commended the club’s ties with the local community.

“It’s really an honour to be involved tonight.”

AFLQ representative Jake Anson applauded the contributions from the relevant governments in providing the lights for one of the country’s premier football facilities.

“We’ve crunched the numbers and we believe that this is most highly used AFL precinct in Australia,” Anson said.

“It’s all about building a community, and this is great.

“We’ve poured $200,000 into this facility in the last two to three years but we think that’s overshadowed by the work the Brisbane City Council has done and the other tiers of Government we hope will invest to the scale in the coming years.”

Speaking whilst a number of men’s and women’s teams trained beside him, Coorparoo Senior Club President Sam Haddad was proud to see numerous sides all out training side-by-side under lights.

“This is absolutely incredible for me to see on a personal level. Close to 100 players all out training together on this fantastic facility,” Haddad said.

Junior club President Mark MacLean has welcomed the community to come out and support the boys, girls, men and women in navy blue.

“If you ever want to pop down on the weekend and watch some quality football, you’re always more than welcome at Coorparoo,” MacLean said.

The facilities newest additions were ready for action just in time as Coorparoo hosted two matches as well as an U11 Girls cluster carnival under lights on Friday night.