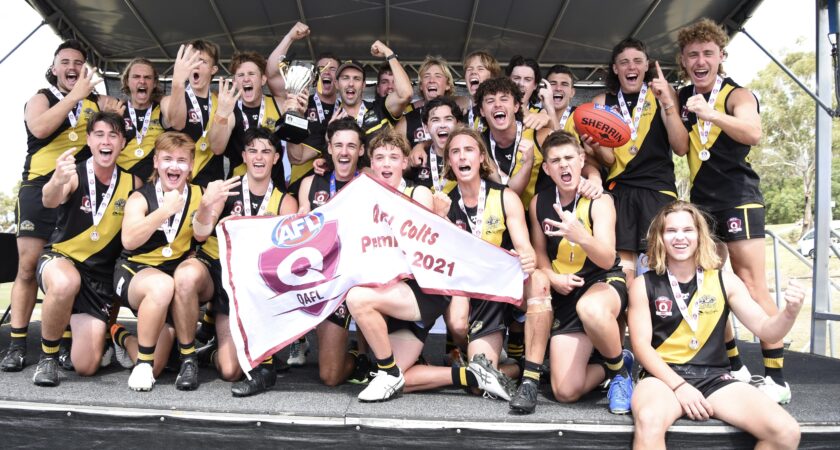 Ruckman Nathan Wright has made the ultimate statement to the Queensland AFL competition with a remarkable best-on-ground effort to guide Labrador to the 2021 Colts premiership over Broadbeach at Fankhauser Reserve in Southport last Saturday.
Wright played one of the most commanding matches seen by a ruckman at this level in quite some time and was easily best-afield in the 47-point win.
Whether it was winning hit-outs from the ruck; contesting his own tap; taking contested marks on the wing; strategically placing himself in key positions that forced Broadbeach to turn the ball over; and even switching with team-mate Lochie Howell in the forward line briefly to kick a goal; the former Townsville product delivered a truly special Grand Final performance that should have the best football ahead of him from that day.
Heading into the game undefeated across the season, Labrador was out to stop a Broadbeach team that had to come from as far back as sixth at the end of the COVID-reduced home and away season to secure a place in the decider and avenge the 20-point loss to Palm Beach Currumbin in the 2020 Colts premiership.
The Tigers burst out of the blocks early when key forward Ky Nicholls set up Baily Brown for the opening goal inside the fourth minute. Nicholls found himself on the receiving end of a pass to kick the game’s second and open up a handy two-goal buffer.
Connor Munro, Jack Bowen and agile tall Taine Dawson received plenty of opportunities to set up play further up for the field for Broadbeach as the duo won plenty of the ball in the back half of the ground.
Labrador’s midfield; led by Campbell Lake and Harry Sullivan continued to create opportunities with plenty of hard-ball wins in the midfield to set up chances for Nicholls, Sam Mercer and Josh Young.
Connor Robson was able to claw a goal back for the Cats inside 10-minutes to close the gap to six-points but unfortunately for his team, and the game itself that was hoping for a grand-stand finish, that was as close as they got.
Labrador led by 20-points at the first break and was clearly the better team in terms of structure. Broadbeach was forced into errors when pushing the ball up to half-forward, allowing for the likes of Ryan Hosking, Ethan White, and McNamara to do as they pleased in defense.
The game-turning moment came when Josh Young bagged a pair of goals for the Tigers to tip the margin over five-goals. Kobe Cumming responded with a pair of goals for Broadbeach thanks to the work of Jonah Semmler; and when it went searching for a third, it was to be with Bailey Brown kicked his second for Labrador just before half-time when the momentum was clearly suited for the 2020 Grand Finalists.
When Sam Mercer bagged his second and third goals for the Tigers in the third term, the margin extended out 34-points and the celebrations started to begin. The party well and truly started when Nathan Wright pushed forward for a few moments to find himself on the receiving end of a pass and kicked truly to blow the margin out to 40 points.
Jonah Semmler tried his heart out for the Cats and that resulted in him kicking a much-deserved goal in the last term. Jared Eckersley grew as the game progressed and Jake Rogers more than played his part. Daniel Le Quesne tried hard down back but it wasn’t to be Broadbeach’s day as Labrador kicked the final three goals of the game and celebrated a famous win in a season that saw it achieved a 100-percent winning record.
While Nathan Wright was clearly best-afield, team-mate Campbell Lake was the next best stand-out in the midfield and played a very inspiring game.
Labrador 4.3, 8.3, 11.4, 14.7 (91)
Broadbeach 1.1, 4.3,- 4.6, 6.8 (44)
Goals: (Broadbeach) C. Robson 2, K. Cumming 2, C. Parkes, J. Semmler 1.