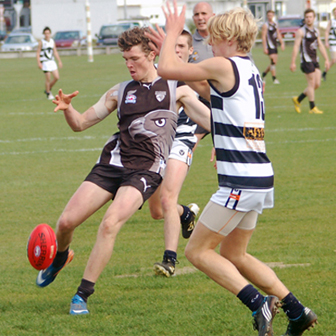 Morningside newcomer and New Zealand expat, Fletcher Barclay, is yet to play a TIS or NEAFL game for Morningside but has already played on the big stage.

Barclay was a part of a South Pacific AFL team who took on the New Zealand Hawks at Westpac Stadium, as a curtain raiser to the Saints v Swans ANZAC Day clash in Wellington, New Zealand.

He was the South Pacific’s best player on ANZAC Day and also featured prominently in their second game against the NZ Hawks a couple of days later – named in the top three players for the carnival.

The eight-day carnival also featured a draft combine where Barclay impressed winning the vertical leap (84cms) and the beep test (14.2).

Morningside Assistant Coach and coincidently South Pacific AFL Coach, David Lake, said that if Barclay continues to develop there are endless possibilities for the youngster.

“He [Barclay] has immersed himself in the culture,” said Lake.

“He’s at the club every night practising and just craves the footy culture.”

“He will play reserves and has the capability of playing senior footy if he continues to develop, I see him being a 100 game player for Morningside – that’s if he doesn’t go further.”

The teenager chose Queensland as his destination of choice to chase his AFL dream in February this year.

The 193cm centre half-forward has used his great running abilities to adjust to the fast level of competition in Australia.

”It’s a huge improvement on what we get over here,” said Barclay.

”It’s been tough, but I’ve been playing pretty well and getting used to the level.”

Despite playing less than 20 Australian Rules games in his career, Barclay’s athletic ability and willingness to learn earned him a call up to the Lions Reserves side earlier in the year.

”That was really amazing. It was such a good opportunity. I was a top-up player, so they have the pro players, and then some fill-ins.

”I was expecting maybe half a game, but I played three quarters. I kicked a goal too, which was pretty awesome.”

Lake says that Barclay is just one of many talented overseas athletes and encourages NEAFL teams to broaden their horizons and search for players offshore.

“There is loads of talent overseas just waiting to be uncovered, clubs just need to find them jobs and encourage them to come over and give it a go,” Lake said.

“It would take a long time to develop them, but if you find the right kid it would be worth it.”