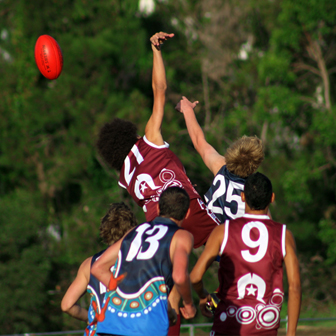 The opening day of matches in the 2012 National Indigenous Under 15 Kickstart Championships on the Gold Coast saw a couple of upsets in the windy conditions. South Australia narrowly defeated last year’s winners, Western Australia, and NSW/ACT also finished with a one point margin over the Northern Territory.

The carnival will see all states and territories represented in a round robin tournament that will conclude on Friday April 13.

Each team comprises of the 25 Indigenous players who were selected from state KickStart Camps held earlier this year. Victoria/Tasmania and New South Wales/ACT will play as combined teams.

The 2012 Flying Boomerang Squad will be selected after the championships. The Boomerangs will participate in the NAB AFL Under 16 Championships which will be held Sydney July 7-14.

Matches continue at Southport Sharks AFC today, Wednesday April 11, with the Grand Final being played on Friday at 10am: