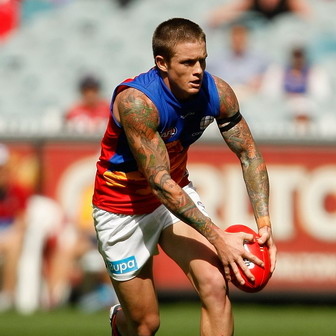 Beams earned the nod for his  25-possession, five-tackle performance in Saturday’s 41-point win over Melbourne at the MCG.

Beams made his debut for the lions in Round 1 last year but was sidelined from May due to stress fractures in his foot.

Beams, taken by the Lions in 2010 after just six senior QAFL games with Labrador, accepted an initial  one-year senior list contract in preference to putting himself into the AFL National Draft.

Beams, born in Melbourne but a Gold Coaster from age two, had played junior football at Mudgeeraba from age five.

He won the Gold Coast League U12 B&F Medal, playing in a Queensland Primary Schools and was runner-up in the U14 League B&F Medal.

He also represented the Gold Coast Stingrays at U14 level and the South Coast U15s.

Beams played the first six games of his U16 season in 2007 but gave football away to concentrate on cricket.

It wasn’t until Claye watched Dayne play at AFL level in his first season at Collingwood that it reignited a football spark which had defused when he gave the game away in 2007.

And the rest, as they say, is history.