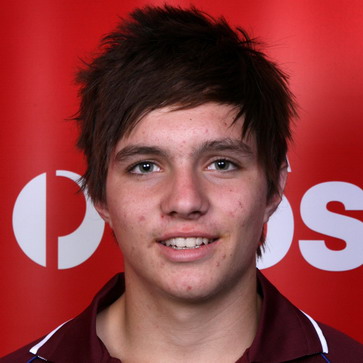 James Ives will skipper the Australia Post Queensland Young Scorpions at the NAB Australian U16 Championships in Sydney.

Ives (pictured), whose father was a Mayne and Southport QAFL player and long-time State representative, is the only member of the championship-winning 2009 Young Scorpions backing up in 2010.

The 16-year-old midfielder/forward from Aspley and the Northern Raiders will have a three-man understudy team, as appointed by coach Ray Windsor.

This means that the Raiders, winners of the State U16 title, will fill three of the four leadership positions.

The Scorpions will look to defend the title they won undefeated in Sydney last year with a team which Windsor says is “on a par” with the 2009 side.

“In terms of ability they are right up there with last year’s side, but they’ve got to prove it by performing on the big stage,” said Windsor, who has stepped up into the senior coaching role this year after two years as assistant-coach of the Young Scorpions.

It is a strong side despite a lengthy injury toll which ruled out several players who would otherwise have been heading to Sydney.

And that is after Mt.Gravatt’s Clay Cameron, an important member of last year’s Young Scorpions side and a walk-up certainty to be there again this year, was forced to miss the entire 2010 campaign with osteitis pubis.

Cameron, with Ives, Oates and Mt.Gravatt’s Ty Brimble, won All-Australian selection at last year’s national U15 Schoolboys carnival, where the Queenslanders scored an historic win over the fancied Victorian Metro side.

“There’s certainly some quality players missing but I’m very happy with the group I’ve got,” said Windsor, a former Brisbane Bears AFL player and 1989 winner of the Larke Medal as the best player at the then Australian Teal Cup (U17) carnival.

“The strength is the evenness of the group. We go really deep in the midfield and we don’t lose a lot when we make our changes, and we’ve got a lot of players who can play well at both ends of the ground,” he said.

“From a coaching viewpoint that’s a terrific thing.

“The big factor will be our defensive intensity. Right through the preparation we’ve been at our best when our tackling pressure is on.

“The group is very skilful – I’ve got no worries there – but the key is how hard we work defensively. If we get our tackling pressure right it means we’re up and going, and we find we tend to control the game.”

“They’ve been terrific,” he said. “Because they are younger they relate well to the players. They really add something to our group and complement myself and Seebs,” he said.

The Young Scorpions, who added 17-year-old South-East Bushrangers pair Alex Sexton and Ryan Johnson as over-age rookie search players from outside the original squad, will leave for Sydney on Saturday.

They’ll take with them a string of family connections.
Wagner is the grandson of Queensland Football Hall of Famer and Sandgate champion Gary Wagner, and the son of Scott Wagner, captain of the very first Brisbane Bears Development Squad.

The Young Scorpions will open their campaign against NSW on Sunday, and will face South Pacific next Wednesday and Tasmania on Saturday week. All games are at Blacktown, future training home of the West Sydney AFL team.

The young Scorpions team, with jumper numbers and clubs, is:-