“It’s the best thing to ever happen to me”: Neate solidifies cult status with Grogan Medal 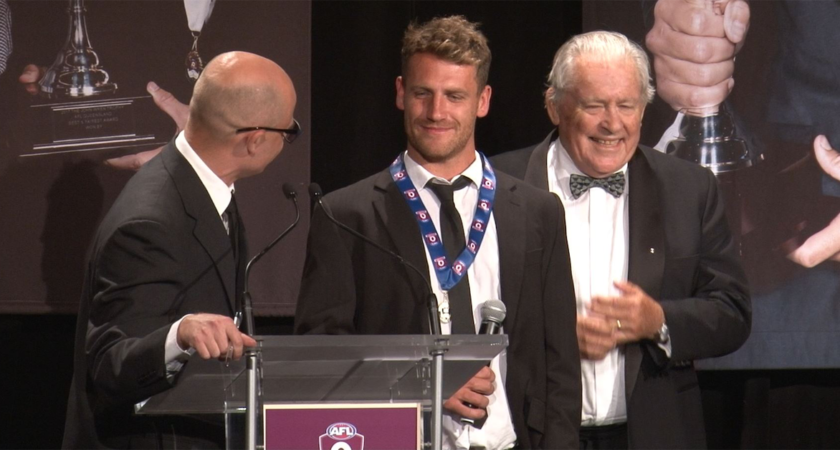 Mt Gravatt veteran Frazer Neate solidified his cult hero status on Sunday night when he was crowned the 74th member of the J.A. Grogan Medal fraternity in a thrilling vote count at the Gabba.

Neate, a respected and well-liked member of both Mt Gravatt and the QAFL, prevailed ahead of teammate Andrew Smith and Palm Beach Currumbin midfielder Thomas Thynne to win by just a single vote earned in the final game of the season.

While he was the first to admit that he never thought he would win the QAFL’s top individual honour, the 27-year-old’s speech centered largely around one theme – his love for the Vultures.

“I didn’t think I would win. I thought Tom Thynne would win it,” Neate told aflq.com.au.

“I honestly didn’t expect this to happen so I’m really proud of myself and the Mt Gravatt boys.”

It was a fitting tribute for a club that has meant so much to the player for so long and fittingly, both parties could celebrate together.

A cult hero at Dittmer Park, Neate’s tenure in the blue and white stripes began at age five.

He played junior football at the club before moving to Under 18 level and then quickly to QAFL level where he has emerged as one of the most respected and well-liked contested midfielders in the league.

Neate’s crowning as the competition’s best and fairest player for 2019 caps off a remarkable season and a fitting accolade for a loyal clubman.

The win also comes despite the laid back midfielder having never won the Vulture’s own club best and fairest.

Neate finished runner up in both 2018 and 2019 and has never sat atop the club’s own standings but now finds himself immortalised among 73 other names etched into QAFL history.

While his sentences remained short throughout his speech and subsequent interview by virtue of both excitement and nervousness, Neate mustered enough to highlight just how much the Medal meant to him.

“It’s the best thing to ever happen to me. I’m really happy,” he said.”

Even more impressive was Neate’s ability to get back on the field, even after a serious injury threatened to derail the second half of his eventual Grogan-winning campaign.

In the Vulture’s six-point loss to archrivals Morningside in Round 15, Neate broken his ribs in the third quarter.

He missed the subsequent final term and the Vulture’s following two games against Palm Beach Currumbin and Surfers Paradise.

“It was pretty tough. I just wanted to get back on the field and support the Mt Gravatt boys and try and get them into finals,” Neate said about his rib injury.

Funnily, second place Thynne and Andrew Smith both earned votes in the two games he missed with two and six votes respectively in those two fixtures.

Despite that, Neate sits atop the QAFL as Mt Gravatt’s first Grogan Medallist since Nathan Gilliland in 2009.