Indigenous Guernsey’s on show in Sir Doug Nicholls Round 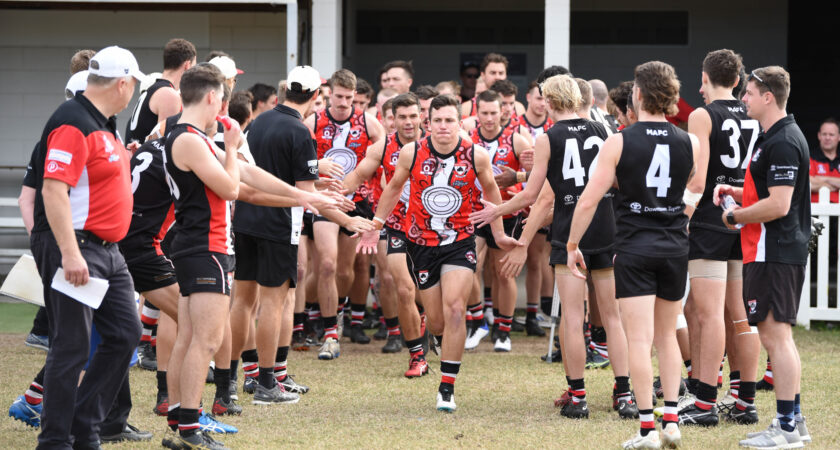 Submitted story: The artists wanted the art piece and jumper to symbolise the Morningside Panthers heritage, values and commitment to being open and welcoming to all in our community. On the jumper, the red represents our land while the centre white panel represents the importance of the Brisbane River to the traditional owners. The main white circles symbolise the Morningside Football Club as a place for corroboree and gathering and the community interaction is represented by the black outer bands. The outer circles of varying shapes, sizes and colours represent the diversity of all groups in our community that are interconnected through the journey lines. Our Club is the centre of our community and we welcome and invite all to come enjoy, contribute to and grow from the association with the Morningside Panthers.

Submitted story: The artwork represents the trees, water and aquatic wildlife around our home at The Canal.

Submitted story: The design features the Carbal (Carpet Snake) which is the tribal totem of the regions traditional owners, the Jarrowair and Giabal people.

Submitted story: The design represents the Brisbane River flowing through the city and the club; an important feature to the club and Traditional Owners. Central to the river is a community group representing the club and its central location. Hands represent the community’s connection and belonging to the club, as well as the traditional owners’ connection to the Brisbane River next to Yeronga. The top symbol represents the importance of the gathering of all people – men, women, kids coming together and utilising the river to hunt and gather food and resources from a traditional point of view, but also from a contemporary, modern perspective.

Designed by: Matt and Ambrose from Ngalin Ayeye/MA Deadly Art

Submitted story: The design depicts the club and it’s long history of diversity and inclusiveness.

Submitted story: Jessica, a descendent of the Biripi people of Taree in New South Wales, sought out the assistance and permission of Kabi Kabi woman Bianca Beetson and Moreton Bay Regional Council’s Indigenous Community Development Officer, Sid Doyle, in order to appropriately represent the traditional custodians of our region.

The front of the guernsey features three animals significant to the Kabi Kabi (pronounced Gubbi Gubbi). At the top, the loggerhead turtle, now sadly endangered, is represented in the beautiful blue waters of Moreton Bay, while in the maroon below are the red-tailed black cockatoo and goanna.

On the chest, taking the place of our golden V, is a boomerang decorated with wattle sprigs, representing our home suburb of Burpengary, from the Aboriginal word meaning “place of the green wattle”.

At the centre of the boomerang is the symbol for meeting place, to represent our home grounds at Moreton Bay Central Sports Complex. It features 18 large dots to represent the on-field players in our team, and 99 smaller dots for our first Senior premiership in 1999.

The back of the guernsey features a coiled snake to represent our old home at Caboolture, from the Kabi words meaning “place of the carpet snake”. Surrounding the snake are symbols for waterholes, representing the waterways that connect the Moreton Bay region.

NAB AFL Auskick – half time during Sir Doug Nicholls Round

The two turtles with different coloured borders on their shell signify the difference between the Larrakia people and the Yugambeh people, but also acknowledge that we are all saltwater people and our connection to country and the sea is still strong.

The sun, which has been a key feature across the 2020 Indigenous guernsey and 2021 warm up top, is featured heavily again, and the red, blue and yellow colours are synonymous of the traditional custodians of the Gold Coast, the birthplace of the SUNS.

The rainbow serpent can be found in the background as the creator of animals, including the turtle, and the great giver of life and protector of water, which is its spiritual home.

The names of all 17 Indigenous and Torres Strait Islander players that have represented the Gold Coast SUNS are also displayed on the back of the guernsey.

Submitted story: Fitzroy’s history is celebrated by the semi-circle shapes arched beneath the Club logo, each a tribute to the 13 Indigenous players to have represented the Club. Below them are six bold red circles that symbolize the grounds the Club has called home throughout its 138-year-history.

The three yellow symbols spaced around the Fitzroy logo represent the Brisbane Lions premierships and the seven red circles, each with four figures surrounding them pays tribute to the 28 teammates who played in the grand final triumphs.

Across the back, hovering over the guernsey number like photos on a mantlepiece, are the Totems or tribal names of the Club’s current Indigenous stars.

The Kangaroo is the Totem for Blake and Keidean Coleman from the Dalabon tribe, the Wallaby represents Callum Ah Chee who is Nyoongar, Yawuru and Nyikina, Cam Ellis-Yolmen is from the Kokatha tribe and his Totem is the sleepy lizard and Charlie Cameron is a Lardil and Waanyi man whose Totem is the shovel-nosed shark.