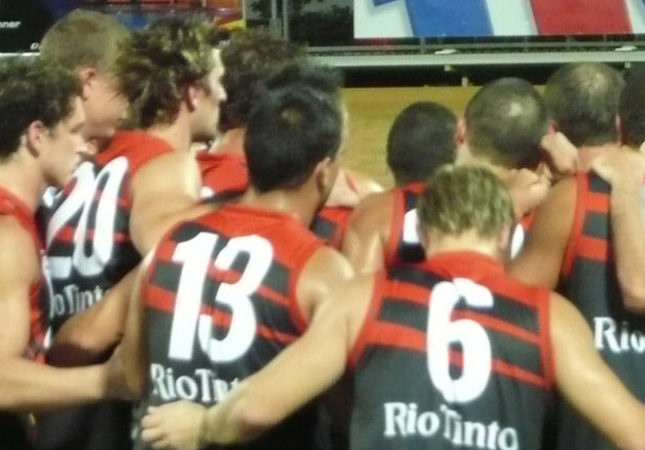 The emerging NT Thunder held their nerve to inflict the first defeat of the season on Southport and put a whole new slant on the QAFL premiership at TIO Stadium last night.

The emerging NT Thunder held their nerve to inflict the first defeat of the season on Southport and put a whole new slant on the QAFL premiership at TIO Stadium last night.

The game was played in unseasonal May humidity and it was the home side that adapted best early with sure ball handling, numbers around the contest and hard running to create space.

Cameron Ilett was dangerous from the outset and in combination with Jake Dignan and the elusive Aaron Motlop controlled the middle of the ground, which created the first two scoring opportunities for lively Bradley Palipuaminni. It would have been three goals for the Thunder pocket-rocket had another shot not faded late and hit the post.

In the goalsquares it was Shaun Tapp v Cleve Hughes and Kurt Niklaus against Ray Hughson Medal leader Darren Ewing.

Hughes kicked the Sharks’ first major deep into the opening quarter, which was countered by a long range goal just before the siren by Thunder skipper Jarred Ilett.

The Thunder took a 17-point advantage into the first break and the second term continued in a similar vein, with both sides on top defensively.

Sharks skipper Danny Wise worked overtime to rally his troops but once again it was the Thunder with more efficient use of the ball with goals from Motlop and the pacy Dion Munkara split by a good conversion by Southport small Brad Scalzo.

Cameron Ilett picked up 17 first half possessions but was poleaxed fairly in a great contest for the ball by Southport’s Jason Bourke, and the Thunder midfielder had to be assisted from the ground by trainers.

Jarred Ilett hit the contest hard at the top of the goal square and kicked truly from the resultant free kick on the bell again to give the home side a handy 27-point break at halftime.

The game opened up in the second half with players from both sides being mindful of not overusing the ball. Hughes kicked his second as did Munkara then a set shot from Wise saw the gap narrow.

Big Thunder ruckman Kenrick Tyrrell was having a great battle with Dean Putt with both players working lateral of the contest but when Tyrrell marked and kicked truly from 40 metres the home side had again repelled the challenge.

Zephi Skinner had been creative and exciting with his use of the ball and played a pivotal part during the third quarter with his marking proving a factor. The Thunder had to explore other avenues to goal as Niklaus was completely shutting out Ewing and Skinner converted from 40 metres out.

He was then awarded a secondary shot after being knocked to the ground and duly slotted from the same spot again as the margin increased to 38 points.

To the Sharks’ credit they regrouped mainly through the hard running efforts of Darren Pfeiffer who stamped his class on the game with a raft of possessions through the middle of the ground. This led to closing goals from Scalzo and Matt Payne to narrow the margin back to 28 points at the final break.

When Skinner opened the final term with the Thunders 11th goal it looked to be all over. However, the Sharks had other ideas and swung Pfeiffer to centre-half-forward and used the ball directly through the corridor.

Hughes kicked his third, then strangely there was another double goal, this time to the Sharks. After Matt Fowler had kicked truly, Glenn Screech – who had been a solid contributor all night – was awarded a secondary shot on goal to which he made no mistake.

This was the beginning of a massive momentum swing and when Screech goaled again on the run from half forward it was game on with only two straight kicks separating the sides.

The intensity lifted and the home crowd, who had been relatively quiet all night, found voice more so in fear of their boys dropping off.

Cameron Ilett, who had been posted deep after his heavy knock, was moved back into the midfield and started getting his hands on the ball again as the Thunder surged forward.

They forced a boundary throw-in deep into their forward 50, and when Munkara sliced through a needle-eye opening to score, they again held a comfortable buffer.

Pfeiffer responded for the Sharks and they had other opportunities through Hughes and Fowler which went astray before Motlop won a free kick on the boundary line and iced the game with a cool conversion.

Hughes kicked his fourth before the final siren to probably give him a points decision over Tapp but the home side held on to stay in touch with the top five.

The Thunder were best served by Motlop, Cameron Ilett, Skinner, Dignan, Mitch Taylor, and the lightning quick Munkara whilst for the visitors Niklaus completely wore down Ewing and held the big spearhead goal less for the first time in the QAFL. Renowned as the number one defender in the competition he certainly did his reputation no harm at all.

Screech was good, Pfeiffer showed his class, Wise tried valiantly early and Bourke down back was a stout defender.

As is the nature of the competition this season both sides face tough away challenges next week in Round 9.

The Thunder travel to the Gold Coast to take on Labrador at Cooke-Murphy Oval whilst the Sharks face a real danger game against an in form Mt Gravatt on the small confines of Dittmer Park.