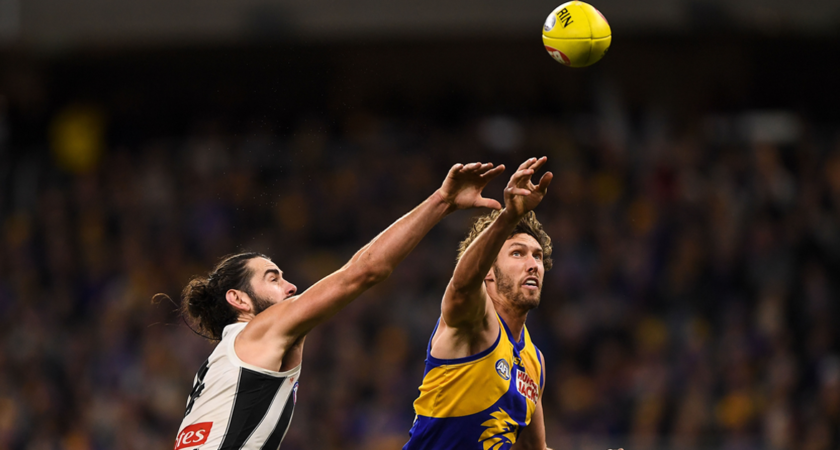 Queenslander Tom Hickey has inadvertently found himself the number on ruckman in an AFL premiership team hoping to defend its title. And they’re looking like they may be a very good chance.

At his third AFL club after stints with the Gold Coast and St Kilda, Hickey has skyrocketed in importance to the West Coast Eagles after first choice ruckman Nic Naitanui was injured again over the weekend.

Naitainui, only three games back from a 12-month lay-off following a second knee reconstruction, has gone down with a  syndesmosis strain in his ankle.

It is an injury that occurred in last Friday night’s loss to Collingwood in Perth, but did not leak out until Monday afternoon.

The club confirmed the damage but did not put any sort of time-frame on Naitanui’s likely return.

The West Australian reported there was a possibility Naitanui could miss the rest of the season, although the paper conceded it was more likely he would play again.

Worrying, though, is the fact that this sort of industry is particularly troublesome for a big and athletic ruckman like Naitanui, who needs to be able to run and jump to be most effective.

According to AFL medical sources, a significant syndesmosis tear could result in a length lay-off, as Carlton’s Marc Murphy discovered in 2016. But a slighter strain may be only four weeks.

The 28-year-old former Alexandra Hills junior and Morningside QAFL player has played 12 of 16 games for the Eagles this season, missing four through injury, and had gone past 2018 premiership ruck back-up Nathan Vardy to be first-choice partner for Naitanui the past three weeks.

Having averaged 10 possessions, 19.5 hit-outs, 4.6 clearances and 3.0 tackles while kicking six handy goals, Hickey will now find himself carrying the load as the Eagles look to defend their 2018 flag,

He had 11 possessions, 14 hit-outs and a goal last Friday against Collingwood playing 67% game time.

It was a Round 17 in which 16 Queenslanders played, and only four had a win.

That was the Lions foursome of Dayne Zorko, Harris Andrews, 100th-gamer Charlie Cameron and late inclusion Ben Keays, who were part of a brilliant win over Port Adelaide at Adelaide Oval on Sunday.

Cameron was a standout with four goals to earn six votes in the Coach’s Association Player of the Year award, while Zorko earned eight votes for 24 possessions and three goals in the Lions’ first win from seven visits to Adelaide Oval.

Andrews, too, continued his excellent season, while Keays, a late inclusion for Hugh McCluggage, played possibly his best AFL game for 15 disposals, two goal assists and some excellent decisions under heavy pressure.

Alex Sexton was the best of six Queenslanders on the wrong end of the Gold Coast Suns’ heavy loss to Adelaide at Metricon Stadium, kicking three goals to go with 13 possessions.

Mabior Chol continued his impressive form for Richmond after holding his spot the return of full forward Jack Riewoldt from injury. Chol, playing his fourth game in a row and the fifth of his career, looked right at home as he picked up 10 disposals, eight hit-outs and a goal.