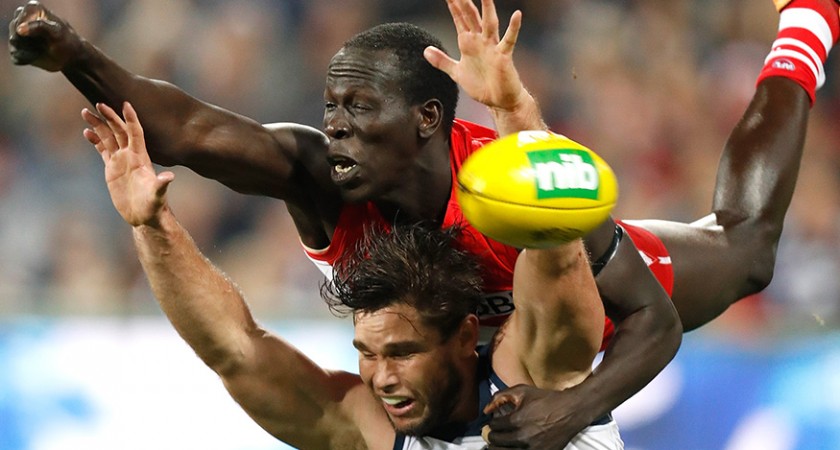 By Peter Blucher.         Sydney Swans ace Dane Rampe has tipped Aliir Aliir to be the next bargain basement draftee to become a long-term member of Sydney’s miserly defence.

This comes after Aliir’s outstanding showing in the Swans’ masterful win over Geelong in Geelong on Friday night.

Going at 80% disposal efficiency, he showed great composure in the pressure-cooker environment between the two premiership hopefuls in front of a sell-out crowd at the Cattery that wasn’t far short of a final.

Appropriately, too, his breakout game came as the AFL celebrated multicultural round.

Rampe, best afield in the Swans’ 38-point win over the fellow premiership hopefuls, was lavish in his praise of his new teammate in a story written by Andrew Wu and published in The Age today.

“He (Aliir) has been in the reserves for a while and just dominates down there. We’ve got the utmost faith in him, that give him some time at AFL level he will really blossom,” Rampe reportedly said.

“He’s got such good skills and agility for a big man and being able to intercept mark is a strength as well. Fingers crossed he can bring that out with a bit more experience.

“I won’t put the pressure on him this early but we think he can be a really important member for us. He’s got a pretty bright future.”

Oddly, despite ranking No.1 in the AFL, the Sydney defence is made up primarily of players from humble football beginnings.

Regular fullback Ted Richards, who was used in a defence forward role against Geelong, became All-Australian after being discarded by Essendon, while Rampe, Heath Grundy and All-Australian Nick Smith are former rookies.

Aliir, taken at No.40 in the 2013 AFL National Draft, was preferred to regular Jeremy Laidler specifically to play on Clark on Friday night.

And while he isn’t guaranteed a spot in the Sydney side after such a glowing performance it would be a harsh call to leave him out of Thursday night’s crunch game against premiers Hawthorn at the SCG.

It would be another big test for the Sudanese-born Kenyan refugee, who is a product of Kedron High School.

The winner will take top spot on the AFL ladder and the loser could drop out of the top four.

AFL Round 16 Wrap
Bell chimes in with 25 goals

Footy is back: Bond University QAFLW Round 1 Preview

2019 in a nutshell After two consecutive Grand Final losses, Coorparoo finally returned to the top of the QAFLW last year. The Kings blew Bond... [more]

2019 in a nutshell Bond University were the fast improvers for 2019, compiling a dominant season from start to almost finish. For much of the season, under... [more]