Bell chimes in with 25 goals 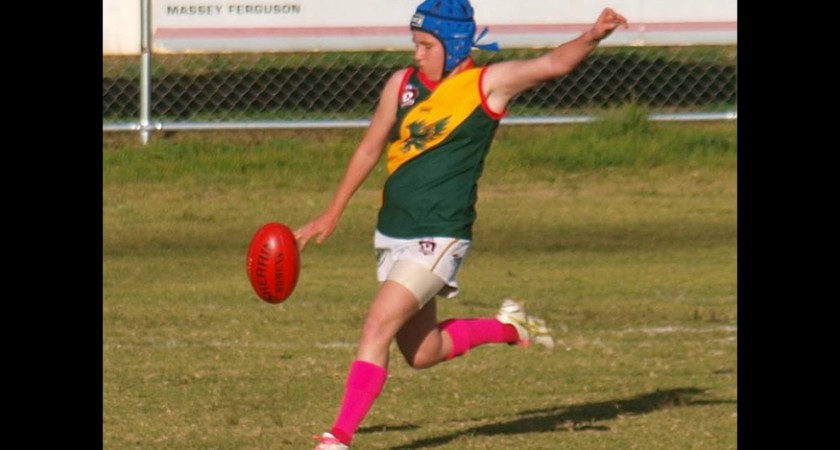 If you were told that Jessica Bell was involved in a 25 goal game, the logical assumption would be that her team kicked 25 goals.

That would be wrong.

She kicked 25 herself… in one game.

That’s 150 points off her own boot. I’ll let that sink in for a second.

Playing for Goondiwindi in the Darling Downs Women’s competition, Bell bagged 25 of a possible 36 Hawks goals in their win over South Burnett.

It was a day out. There is no other way to describe it. But heading in, Bell wasn’t sure things would go that well.

“No I didn’t have much confidence. It was my first game back from an ankle injury, after missing three weeks, so I wasn’t confident at all,” Bell said.

That all changed quickly.

When she jogged into the quarter tine huddle, she already had doubled her previous biggest haul in a game.

“Someone told me I had kicked 10 already. The most I’ve ever kicked before that in a game was five,” she said.

If you checked the Fox Sports Pulse goal kicker tally after the game, you would have seen her name on top… of the whole country.

So what was key?

“I had an opponent, but whenever the ball came down I was able to get away from the pack, and become free,” Bell said.

Bell has been a Hawk for seven years now.

“My two brothers were playing at Goondiwindi, so they convinced me to play AFL. I started playing in the Under 12’s and really loved it,” she said

“I continued playing juniors until my last year of Under 14, when I heard they were fielding a women’s team, so it’s all grown from there. AFL is a family favorite.”

At just 15 years old, she played her first game of senior footy, and has never looked back.

There is a bit to play out in 2016, with Goondiwindi sitting second on the ladder behind Toowoomba, but she’s definitely got an eye on the future now.

“AFL is a career goal now. I would love to be able to play in the National Women’s League,” Bell said.

“I’ve been asked if I can play for Zillmere in Brisbane next year, so I’m going to try and do that if I can.”

Bell usually plays in the midfield, and looks forward to getting back in there next game, but if the coach named her at full forward again, could you blame them?

“I’ve mostly played in the midfield, so it was a bit of a difference playing in the forward line, but I’m hoping to kick a few more goals this year that’s for sure,” she said.

Look out QWAFL, look out AFL?