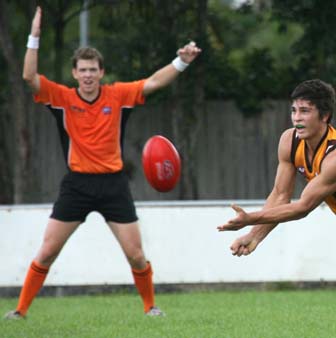 The trio were named after training last night, with Aaron Hall the emergency.

The quartet have been clearly the form field umpires of the finals series, which has seen two close finishes in the last fortnight with the umpires playing a happily understated role.

The incentive of an AFL berth inspired McKenzie to his best season yet in the QAFL and the 2010 Umpire of the Year Award.

In a season where the quality of the umpiring was good at the top level all year, McKenzie beat several well-credentialed peers to the title.

The 26-year-old credited a torturous summer regime for his outstanding winter. He lost 8kg while trialling for the AFL umpires list and was rewarded with a rookie list berth for the first time.

“I had a really good pre-season and it has been my most consistent,” McKenzie said, having also been named QAFL Umpire of the Year in 2005.

He will control his third QAFL senior grand final today, having been in excellent form throughout the finals series.

McKenzie was part of the field umpiring team that did an outstanding job with what started out as a niggling qualifying final at Southport and was rock solid again last week.

“It is exciting to get a grand final because you never really know whether you have got it until that week,” he said of a selection process that is very much performance based. “You are more nervous in the semis and preliminary, whereas you can relax a little bit on grand final day.

“It is often the game you enjoy the most and perform the best in.”

McKenzie’s talent was recognized early, making his senior debut at the raw age of 17. He controlled a Western Magpies-Morningside match at Chelmer and remembers nothing out of the ordinary from the game, which suggests it was a good one for the young whistleblower.

He went on to earn his first State appointment in 2005, a memorable day all round.

“My dad comes along and watches regularly and he was at the Gabba for a Queensland-ACT game in 2005, which was pretty close and where I really enjoyed myself,” he said. “Dad said afterwards that was the best game he had seen me umpire.”

His father Gary was his inspiration for taking up umpiring after having played junior football at Broadbeach. After a long playing career, Gary had turned to umpiring and Matt decided to follow the same path but from a much earlier age.

McKenzie sat on the bench as the emergency for half the Brisbane Lions’ home games this year, but experienced the thrill of an AFL game when he and fellow Queenslander Ryan controlled a North Melbourne-Geelong nab Cup match at Etihad Stadium in March.

“It was a great experience to be out there with the crowd and everything and the feedback we got was really positive,” he said.

It has given the young veteran even more of a spur to work his way to the elite level of the game.

“Most umpires, especially at senior level in the respective States, aspire to umpire at AFL level,” he said. “You just have to bide your time, get as much experience as you can and wait for your opportunity to come.”