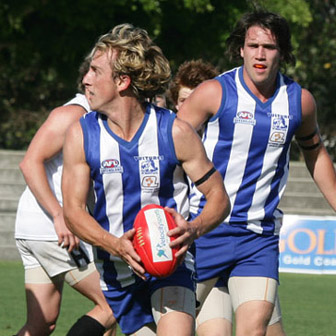 A new gymnasium at Dittmer Park has ensured that Mt Gravatt are in a far better position to hit the ground running in the 2011 NEAFL season.

Construction work through the 2009-10 summer coupled with a casual attitude by some players saw the Vultures start the last QAFL season slowly and appear out of finals contention at the halfway mark.

However, they hit their straps to win eight consecutive games against all opponents, including grand finalists Morningside and Labrador, before going ‘flat’ on first semi-final day against Southport.

Historically strong starters under David Lake, the Mt Gravatt coach has ensured there will be no repeat of last season in the inaugural year of the NEAFL.

“We have got an amazing new gym that was sourced through a Government grant with the help of David O’Leary at AFLQ and it was ready for post-Christmas training,” Lake said.

The ever-enthusiastic Lake left his players in no doubt before Christmas as to what was required in the pre-season.

“We signed who we wanted, we have got a good list together, and they have had to put the hard work in at the right time of the year this time,” he said.

Lake has employed former Redland assistant Andrew Mellor on his coaching staff for 2011, with ex-Western Magpies coach Jarrod Thorpe back as another assistant.

He also has Paul Mills from Wilston-Grange and Scott Rixon working as development coaches.

One of the big bonuses for Mt Gravatt and the Queensland State team will be if midfielder Ash Evans can complete a full season in 2011.

Beset by injury for chunks of the last three years, Evans did not play until Round 10 last season and is one of the League’s elite players when fully fit.

Another player the Vultures are sensing a big year from is lively midfielder Troy Jamieson, who is looking good following hip surgery.