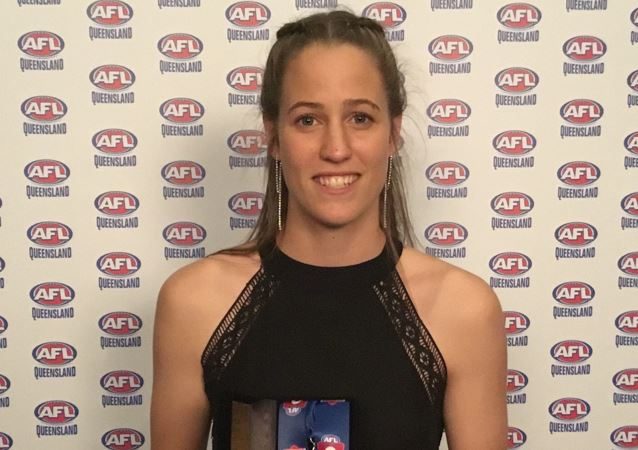 Coorparoo youngster Tori Groves-Little isn’t even old enough to legally vote, but at the 73rd annual J.A Grogan Medal, she was voted the best and fairest player in the QWAFL across the 2018 season.

At just 17 years old, Groves-Little made history by becoming the awards’ youngest ever winner.

She polled twelve votes to claim the best and fairest award alongside Wilston Grange midfielder Brittany Gibson who she tied for the competition’s top honour.

Her coronation, in front of a packed audience in the Gabba’s Legends room, was a shock even to Groves-Little herself with even her admitting the thought of winning the competition’s award for the best and fairest player barely even crossed her mind.

“I never expected it after my season. I thought I was still developing but to win it is a massive privilege and I wouldn’t want to end the season any other way,” Groves-Little told aflq.com.au moments after the win.

“I probably want to cry but there’s too many people here, so I can’t. It’s an amazing feeling and I am very honoured.”

The 2018 season was Groves-Little’s first at QWAFL level and a far cry from her former days in the AFL Brisbane Juniors Under 17 Youth Girls competition where her Beenleigh side were forced to merge with Ipswich – a club nearly 60 kilometres away – throughout the 2017 season.

Groves-Little polled six votes in the opening six rounds, courtesy of two best on ground performances in Rounds 5 and 6, to top the competition after the first third of the season.

Her commitments for the Queensland Under 18 AFL Women’s representative side and Gold Coast SUNS Winter Series teams made it difficult to poll throughout the middle stages, and by the end of Round 15, Groves-Little’s name hadn’t even cracked the leaderboard that was projected across the room.

She polled three votes in the penultimate Round 16 and jolted up to third place overall alongside University of Queensland’s Sabrina Frederick-Traub but by the time the final game in Round 17 were about to be read, Groves-Little was the fifth name on the list.

In the final game of the season, she managed the required three votes to draw level with Gibson atop the leaderboard.

Given just how far she had come from to win the award, it took some time for both the audience and Groves-Little herself came to grips as to actually what had happened.

The crowning achievement capped off a remarkable 2018 season for Groves-Little at both club and representative level, but her move to the Kings almost didn’t transpire given her close link to the Buffaloes.

“It was a really tough move moving from Beenleigh. I still live down there so for me to drive half an hour to play footy was a big step,” she said.

“It definitely sends my parents wild knowing that I’m out all the time.”

“Moving to Coorparoo was definitely the best decision I’ve made to better my footballing career.”

Most bidding female footballers transition from the Youth Girls competitions to QWAFL at 17, but Groves-Little made the decision to stay with Beenleigh for one more season and only joined the Kings this year.

The collective of past winners have all gone on to play AFLW with the Brisbane Lions and Groves-Little would love to follow suit in what is her draft year in 2018.

“It’s amazing to be among such company and to be able to learn of them.

“[Emma] Zileke and Woosh [Jess Wuetschner] have helped me a lot this year and I’ve always looked up to Ally Anderson as a player, so to be able to play with her is amazing.”

“Hopefully when October 23rd comes around my name gets picked.”