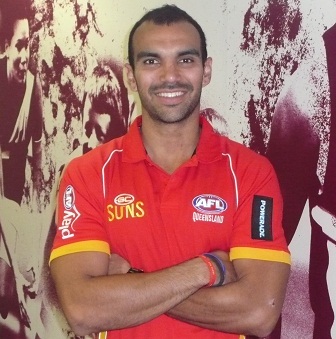 Impressive Mt Gravatt utility Jesse Green missed the Vultures win at Broadbeach last Saturday – he was playing at the MCG instead.

Green played for the South against the North in the curtain-raiser to the Richmond-Essendon game, the centrepiece of the AFL’s Indigenous Round.

In fact, he spent the week in Melbourne at the Footy Means Business Camp.

Now in its second year, the Footy Means Business program provides 18 to 24-year-old Indigenous men with exposure to elite AFL programs and training, along with networking opportunities in corporate environments to strengthen leadership and teamwork skills.

So far, Footy Means Business – which is strongly supported by sponsor Rio Tinto – has assisted 30 young men to achieve their employment goal.

Under the four-year program, 50 participants are selected each year by AFL regional development officers based on football ability, engagement with their communities and their potential to serve as a role model.

Green was recently employed by AFL Queensland as its Indigenous programs coordinator.

The players invited into the program cannot be attached to elite-level AFL clubs.

As part of the camp, the Footy Means Business participants undertook employment and football training including  formal job interviews conducted by NAB, media training at the Seven Network, training drills at Victoria Police, training sessions at Richmond and Essendon Football Clubs and playing in the ‘Dreamtime at the G’ curtain-raiser.

The likes of Chris Johnson and Brad Johnson were also involved, while AFL boss Andrew Demetriou spent a session addressing the players.

Former Cairns product Courtenay Dempsey and Essendon teammate Paddy Ryder took the South team for a view of the Bombers’ Windy Hill facilities during before a team training run there.

The players were also at the launch of the Indigenous Round, which featured Melbourne star Aaron Davey.

They helped Davey perform the ‘Flying Boomerangs’ war-cry, which was featured on news reports around the country following the launch.

Green revealed the war-cry dance started after an Indigenous team played in Papua New Guinea and were impressed by that team’s pre-game ceremony.

“It was a great week and I’m sure all the boys involved got a lot out of it,” Green said.

He was impressed by every aspect, which included sitting on the Game Day TV show panel to be interviewed by ex-Geelong captain Tom Harley as part of the media training.

Friendly, well-spoken and enthusiastic, Green was back at AFLQ’s Yeronga offices on Monday morning getting stuck into work, before turning his attention to preparations for the Vultures’ big clash with Redland at Dittmer Park on Saturday.