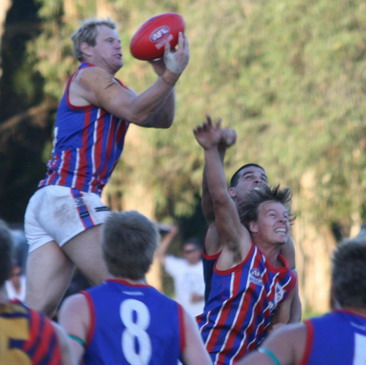 THE equation for Wilston-Grange this weekend is simple: Win their round-18 home clash against Surfers Paradise at Hickey Park (1pm start) and the club will achieve its best finish for years, a place in the qualifying final.

Lose and the Gorillas will most likely be destined for an elimination final, possibly on the road to Palm Beach-Currumbin.
The Gorillas sit fourth on the ladder, level on points with Noosa, Western Magpies and Sandgate, but with the latter having the bye in the final round, would settle into the top three, which carries the vital finals double-chance.
“At the start of the year our aim was to play finals, and now we have an opportunity to get the double chance,” said coach David Martin.
“An outside view was that a top-three finish was unlikely, but now what we have is a terrific opportunity stitch up a top-three spot.”
Keeping in mind the fact that Surfers beat the Grange on the Gold Coast last year to end whatever chance the Gorillas had of playing finals football, there is a lot of motivation for the home side.
But they will be doing it tough, for want of a better description, without their in-and-under skipper David Tough, who sustained a double fracture of an arm last weekend against Burleigh.
Tough has been replaced by Chris Gerber, but Martin admits his indisposed leader will be sorely missed.
“We’re not going to replace a Toughy so everyone has to play with a bit of Toughy in them to cover the loss,” said Martin.
“We’ve  still got plenty of options.”
Surfers, whose only change is rover Jordan Pope in for crack teenager rover Brody Haberfield (under-18 duties), would like nothing better than to bowl over the Gorillas again.
Coach Beau Zorko said there has not been a hint of his players slipping into cruise mode after their finals hopes were dashed by last weekend’s loss to Palm Beach-Currumbin.
Since Zorko took over as coach mid-season, the Demons have won seven of nine, their only losses being to PBC and Noosa, so they head to Brisbane definitely in-form.
“None whatsoever,” said Zorko if there was an atmosphere of the season being over for his players.
“We have a game of football to win and to make sure we finish the season off on the right note.
“We deserve some rewards for the effort put in over the last 10 weeks.
“As I said last week, we’re not going to make the finals, but we can certainly shape them.”
There is a sad touch associated to the game. A minute’s silence will be held before first bounce to honour former Grange player and junior coach Pete Vass, who died from a heart attack early this week.