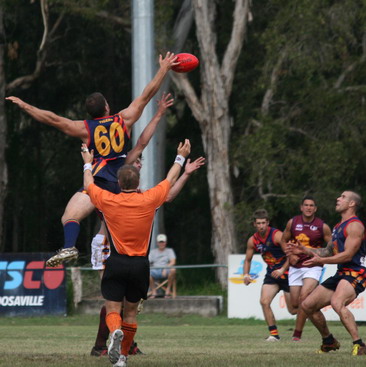 MOST coaches and players rate the trip to Noosa as the toughest assignment on the Pineapple Hotel Cup fixture list.
For season surprise packets Wilston-Grange this is certainly the case, but it is a challenge the Gorillas are looking forward to.
It is a road trip to the Sunshine Coast that will tell the Grange hierarchy just where their vastly improved team is really at, whether they are worthy of their position unbeaten at the top of the points ladder.
In another interesting fixture, last weekend’s big back-to-earth performers Surfers Paradise take on the Western Magpies on the Gold Coast.
Elsewhere, Coolangatta host Sandgate at Peak Oval; Springwood take on Burleigh at Lowe Oval; and Palm Beach-Currumbin are at home to Mayne. Maroochy-Northshore have the bye.

Noosa v Wilston-Grange
At Weyba Road, 2pm Saturday
WILSTON-Grange’s position as unbeaten premiership leaders of the AFLQ Premier Division goes on the line when the Gorillas make the dreaded trip to Weyba Road to take on 2010 champions Noosa.
There is no doubt that this is the hardest away assignment in the competition at the moment – and the Gorillas intend to leave no stone unturned in their bid to make a success of the venture.
“This is as hard as it gets,” noted Grange coach David Martin. “The travel – you sort of switch off on the trip and when you get there they (Noosa) always seem to be waiting for you.”
To ensure everyone is switched on, the Gorillas plan to travel early, have a team walk and chat, then prepare for battle.
They are going in as positive as they can, said Martin, who believes he knows enough about the Tigers to match them.
“I saw them in the grand final last year and the same culprits are still there, aren’t they, so your depth is going to be tested.”
Asked if the Gorillas have what it takes to lower the boom on the Tiges, Martin replied: “We haven’t played them yet, so we don’t know.
“All we can do is go there, do what we’ve been doing, apply the pressure and see how they react to it.
“If that’s not good enough, then it’s only round five and you can go back go back and try a few things different.”
Although beaten by Surfers Paradise in a round-three upset, Noosa regrouped last weekend and took the points away to Western Magpies.
For sure, Noosa coach Wayne Fletcher has taken note of Wilston-Grange’s vastly improved performances this season and expected nothing but a lion-hearted effort from the visitors.
“Obviously they stand out because they’re the only unbeaten team,” said Fletcher.
“They’ve always been around the mark but this year they have recruited a couple of quality players.
“So it should be a good contest and it certainly will be a big challenge for us.”
Fletcher has some sobering news for title challengers when he revealed former grand final player Ryan Sawyers and last year’s premiership side members Zac Smith and Gary Wallace have all resumed training.
The Tigers bring back rover Caleb Isles and ruckman Andrew Coates for the Gorillas engagement.
Noosa: Caleb Isles and Andrew Coates back after missing last weekend.
The Grange have lost wingman Zac Nolan for six to eight weeks because of a knee injury and they promoted local junior Lou Knox in his place.

Surfers Paradise v Western Magpies
At Sir Bruce Small Park, 2pm Saturday
LESSON learned, Surfers Paradise now have to prove they are up to the mark when they host high-flying Western Magpies the week after one of the most humbling performances in the club’s history.
Coach Rob Martin is adamant his Demons are back on track for what is another real test of character for the Gold Coast club, which won its first four games before going down to 2010 grand finalists Sandgate last weekend.
The Demons lost by 108 points and Martin subsequently accused his players of giving up as early as 10 minutes before quarter-time.
Insipid was the word used by Martin, but he is confident it will be a suitably chastened Demons outfit that takes the field against the Magpies.
“We have trained well this week and the attitude has been much more positive,” said Martin.
“We’re trying to get some respect back – that’s all we can do.”
Martin believes the Magpies are on a level with Noosa in terms of quality, noting last weekend when the Magpies lost to Noosa without several key players.
In bad news for the Demons, the Magpies get back key forwards David Hamill and Val Pope this round.
And in threatening news for the other clubs, coach Peter McClelland revealed past players Ed McDonald and Ben Heffernan-Roper are back in training in the black and white jumper.
McClelland has taken note of the erratic form of the Demons, but remains guarded in his predictions.
“We’re playing at their oval and we know they’ll come hard at us early, but our main thing is to get back on track after last week.”
Surfers have lost key midfielder Jake Ryan, who faces two months of radiation treatment to remove a tumour near his ribcage.
As well, teenager Brody Haberfield has been called up to the Gold Coast Suns reserves side.
Into the Surfers side are Josh Orton and Mick Cunningham.

Coolangatta v Sandgate
At Len Peak Oval, 1pm Saturday
TWO wins in a row have the Coolangatta Blues on a high, but this weekend they come up against a genuine top-three side in Sandgate.
Coach Neil McKay concedes a match with the Hawks is a better test of where the Blues sit in the pecking order – and an occasion that offers his players the chance to prove they are up to answering McKay’s match plans.
“this is the hardest one, against last year’s grand finalists and them coming off a big win against Surfers Paradise,” said McKay.
“The big test is whether we can concentrate for long enough periods and keep intensity up for long enough periods.”
The Blues have been forced to make five changes for a variety of reasons. They have had to replace Dan Cossar, Andrew Boyce, Andy Dowling, Dalton Sanderson and Leigh Missen.
Into the side are Papua New Guineans Junior Henry and John Vogae, along with Brendan White, Nathan Millard and Ben Dovey.
Sandgate, after four wins and a loss, have three changes.
The Hawks have lost small forward Trent Morrissey (knee), ruckman/forward Brendan Forbes (hamstring) and the unlucky David Scott.
Super veteran Dan Dickfos is back from injury, star midfielder Matt Nuss is also available again and the Hawks promoted half-back Michael McCoy.
Sandgate player-coach Ben Long admits he knows nothing at all about Coolangatta other than they seem to have recruited well.
“They’ve always been a side that if they could recruit a couple of quality players, which they have, that they’d be going all right,” said Long.

Palm Beach-Currumbin v Mayne
At Salk Oval, 2pm Saturday
FORMER champion midfielder Darren Beaufoy will make his seniors coaching debut when he takes over as match-day coach of Palm Beach-Currumbin for their home match against Mayne.
Beaufoy, a past club best and fairest and premiership player, has landed the coaching job in the absence of Craig O’Brien, who has work in central  Queensland.
This is a match the Lions simply have to win, but if there is any hint of complacency among the players, they should cast their minds back to 2009 when, as rank outsiders, Mayne beat the Lions by six points in a massive upset in a season when PBC went on to win the flag.
It is a tough situation the Lions are in at the moment, although O’Brien remains super optimistic his side can get back on the rails after three losses from four rounds (they have had the bye).
O’Brien thought his side had thrown away a win against Wilston-Grange last weekend after losses to power sides Western Magpies and Noosa.
“We’re nowhere near panic stations,” said O’Brien, “but we do need to start getting points on the board.”
At the selection table, the Lions have rewarded form in the reserves by promoting Tyson Dyer, Steve Thynne, Troy Brown and Blake Schneider.
Ou this weekend are the unavailable Arnold Knight (unavailable), co-captain Matt Carroll (hamstring), Danny Zvatora and Jordan Bates.
Mayne have lost Matt Jones, Glen Kirby and Joe Hickey and they have been replaced by Jackson Quaife, Keane White and Jack McKenna.
Defender is a big loss, said player-coach Luke Faulkner, who again has to work on ways to get his Tigers fired up for the first quarter.
After several poor starts, the Tigers have spoken about the issue at length during the week.
If that problem can be solver, Faulkner believes his side has what it takes to spring an upset.
“We’ll try to play our style on our terms,’ he said. “If we can get on top in defence I think we have the midfield and the attack to kick a score.”

Springwood v Burleigh
At Lowe Oval, 2pm Saturday
SPRINGWOOD’S youth policy has advanced to the stage where a staggering 22 players from the club’s under-18 ranks will be turning out in both seniors and reserves in matches against Burleigh on Saturday.
That is encouraging news for the Pumas, who have been at the wrong end of the ladder for too long but who are sure to be buoyed by their first win of the season last weekend against Mayne.
But, as coach Paul Opbroek says, there is still a long way to go to see if the push for youth has its rewards.
Yet another club junior product, under-18 Jye Hall, will be making his first-grade debut for the Pumas this weekend.
“The basis is there, now it’s a case of how quickly they come along,” he said.
In a blow for the Pumas, though, star midfielder Michael Grose has reinjured his shoulder and will miss this weekend.
He joins Grant Jobson, Taylor Pezzelato and Andrew Sponneck as changes to the seniors line-up to tackle the Bombers, who are struggling for form and at the moment looking nothing like the side that made it to the 2010 preliminary final.
Burleigh get some much-needed height and experience back with the returns of centre half-back Tim McKay and veteran ruckman John Chenhall. They are among four changers for the Bombers, who have also brought in Jay Allan and Ben Ranger.
But a surprise is the omission of veteran Peter Laenger, who is back in reserve grade for the first time in years.
Also out of the side are Oliver Rennie, Matt Deidrich and Jacob Howell.
Coach Zane Doubleday agrees his Bombers have to improve – and improve quickly – if they are to match last season’s stellar finish.
“On current form this match is probably a battle for second bottom,” he said.
“But with Chenhall and McKay back it gives a bit of height and a lot of experience.
“I’m hoping this will give us a stronger structure through the spine.”