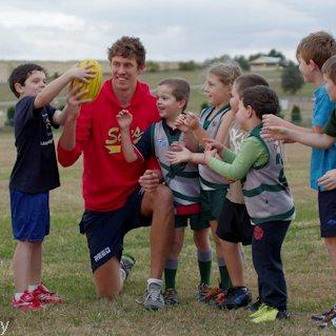 Fassifern JAFC may only be a new club, but it’s already drawing some big names. Recently Gold Coast SUNS player Tom Hickey made the 2 hour drive to assist with club training.

The son of a former top-level Brisbane rugby league player, Hickey joined the GC SUNS as a Queensland Zone priority selection at the end of the 2010 VFL season.

Hickey grew up playing for Morningside and was keen to give something back to community, much to the delight of parents and players alike.

Hickey gave some invaluable tips to the under 10’s as he oversaw some offensive and defensive drills. He joined in on games with the younger players including a new club favourite, “Bomb the SUNS Player”.

After training, Tom presented the club with a Club jersey signed by every member of the team, a memento the club will treasure for years to come.

Hickey’s ethos of working hard to achieve your dream impressed the old and young alike.

“ That sort of thing is invaluable not only to kids, but also to parents who do a lot to have their kids involved,” said Petras.

“Tom conducted himself exceptionally; he is a credit to himself, the SUNS and the AFL”.