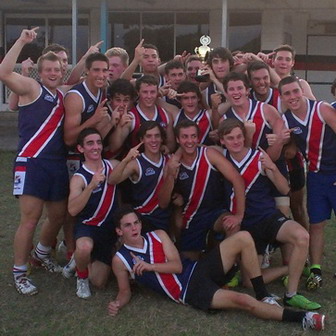 The Gold Coast SUNS Cup has been the highlight of school footy in the Mackay region this term, with the winners decided in two Grand Final showdowns on November 7.

The young Proserpine team put in a resounding effort to match it with the strong St. Patrick’s outfit. Proserpine hit the front early, with a 5-point lead at quarter time after 2 early goals.

The St Patrick’s team grew with confidence as the game progressed, kicking 3.3 to 0.1 to lead by 15 points at half-time.

Captain class Todd Carbone led from the front foot with a best on ground performance, with strong performances from Daniel Rundell and league star Scott Schulte.

St Patrick’s College finished 27-point victors, with both teams given the opportunity to compete at next year’s North Queensland Open Schools Championships at Cazaly’s Stadium in Cairns.

Whitsunday Anglican put in a gallant display, filled with confidence after a 30-point come from behind victory against Pioneer two weeks ago.

Both teams entertained the jovial crowd of parents, teachers and students with a fast-paced display of AFL played in great spirit.

Best on Ground for Pioneer went to Tabitha Kitchener, fielding a strong performance.

Captain Hannah Hillman, recently selected in the QLD U18s Women’s AFL squad, showcased her leadership skills to kick a telling goal on the run late in the third quarter.

The Pioneer girls now have the opportunity to travel to Cairns in July next year to compete at the Nth Queensland Open School Championships.

This event is held in conjunction with the Gold Coast SUNS vs. Richmond Tigers AFL match at Cazaly’s Stadium.

Urquhart kicks off again
Want a career as an AFL recruiter?