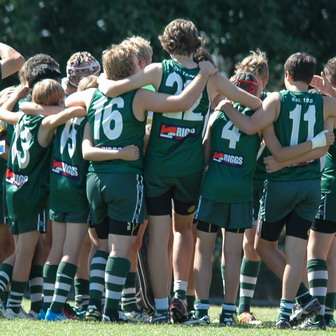 The Gladstone Mudcrabs under15s have reason to celebrate following an outstanding 2012 season.

Undefeated through the 17 hone-and-away games, the “Muddies” went on to win the 2012 AFL Capricornia under 15 premiership by a whopping 93 points.

A spate of individual accolades further highlight the depth of talent in the under 15 team this season.

Gladstone players took out the 2012 under 15 league best and fairest and leading goal kicker awards, and three of the top four goal kickers were Mudcrabs.

They also had eight individuals selected in the Country Kookaburras representative team to compete at the 2012 under 14 and 16 State Championships.

The Gladstone juggernaut could continue into 2013 as the team fielded a number of first year players in 2012.  The under 15s cite good teamwork as a key factor in their 2012 season. The team were often missing a number of their best players to representative commitments but managed to play as if their star players were still on the field.