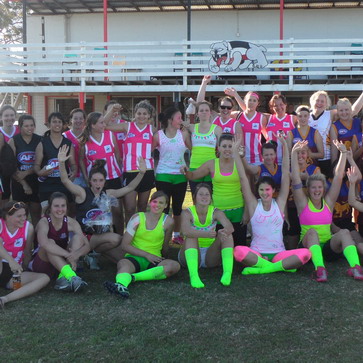 Gladstone was the bright light in the open division of the Women’s AFL carnival held in Bundaberg at the weekend.

Gladstone was the bright light in the open division of the Women’s AFL carnival held in Bundaberg at the weekend.

Queensland U18 representative Megan Hunt dominated for Gladstone in both games against Across the Waves and a combined Bundaberg-Hervey Bay side.

Taking the field in a fluoro uniform strip must have worked for the Gladstone team (pictured), predominantly made up of Mudcrabs and Saints, as they couldn’t miss each other or the goals in the first match.

They finished with a 15.23.122 to 3.4.22 win in what was a very lop-sided affair and if not for inaccuracy in front of the goal, the margin would have been greater.

With only a short break between matches, Gladstone were a bit flat at the start of the second match and soon found themselves behind by several goals.

Mudcrabs player Emma Aeschlimann was a very strong contributor for Gladstone, and midfielder Hayley Beaumont was in everything around the ground.

But it was the way the team gelled as a unit which was the most pleasing aspect of the wins, as the girls had not had a training run together before the match.

As part of the carnival, a junior competition was also held and CQ Cobras U18s selectors were keeping a keen eye on talent in the junior division as the side will soon be picked.