GIRLS TEAMS THRIVE IN THE WET 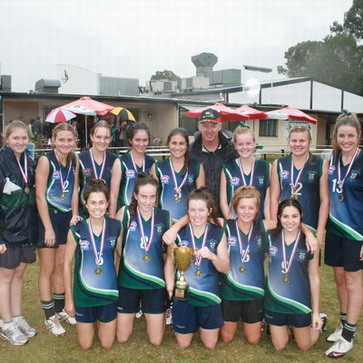 Catholic Colleges, St Teresa’s (Noosaville) and St Ursula’s (Toowoomba), received some help from above when the heavens opened up on the Jonathan Brown Cup final on Thursday 19 May at Sherwood.

Both schools thrived in the wet conditions and took out the Junior and Senior divisions respectively over strong contenders Park Ridge SHS (juniors) and Mountain Creek SHS (seniors).

After a tight first quarter in the Junior Division Final, St Teresa’s kicked away in the second quarter to lead 3.8.26 to Park Ridge’s 1.1.6 at halftime.

The third quarter was a tight tussle with only two points scored as the rain continued its onslaught, making conditions difficult to score.

In yet another tight quarter to finish the match Park Ridge scored the only points in the final 10 minutes – an unanswered goal.

In the Senior Division final, St Ursula’s got off to a good start in the first quarter with some good physicality to throw a surprised Mountain Creek off their game.

By half time St Ursula’s lead had blown out to 17 points with Mountain Creek scrambling to stay in the game.

The third quarter had St Ursula’s increase their lead by seven points but, despite the lop-sided scoreline, it wasn’t over.

And in the last quarter Mountain Creek mounted a sensational attacking game to bring things to life.

Unfortunately, though, for Mountain Creek, St Ursula’s (pictured) were able to withstand the constant pressure on the goals and keep the Creekers to five shots that all were wayward due to outstanding defence.

Best on ground Was Tahlor Sullivan from St Ursula’s.