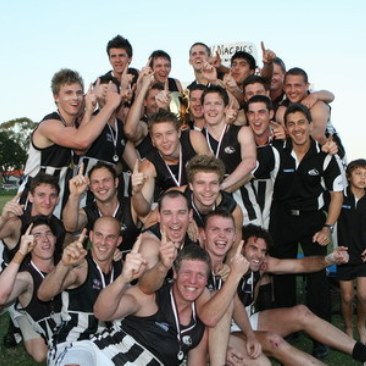 The Western Magpies added an incredible chapter to their rivalry with Palm Beach, winning the 2008 flag.

They’ve been the heavyweights of the competition over the past decade, winning five of the last seven flags, and this weekend Palm Beach and the Magpies will add another epic chapter to their incredible history.

One of the most sensational entries in that history was the 2008 grand final, in the then Division Two competition.

The Magpies squad of that year had an average age of only 22, with three 17 year-olds in their ranks, and not a single player over 30.

Those youngsters had snapped the defending premiers’ 39-game winning streak earlier in the year,

They went in as massive underdogs against a Palm Beach side that had dominated for much of the previous two seasons, and the Magpies had gone through the hard way, after a qualifying final loss.

That team included some Queensland footy stalwarts, many of whom are now scattered throughout the competition.

Mt Gravatt’s Luke Scott, Springwood’s Greg Friis and the Vultures’ Matthew Skubis all played in the decider that day, as well as a number of players who would go on to be 2012 premiership players with the Magpies.

One of the youngsters that fronted up for the Magpies, Gerard Moore, is now leading the club as a co-captain for 2013.

Moore was in his first year of senior footy, and will never forget that first grand final and first premiership.

In the week leading up to the match, the Sherwood club invited former premiership players, including Ray Windsor to the club to speak about the opportunity in their grasp.

“They just told us about how they came from being underdogs all season to beating a side that’s supposedly unbeatable and they had a positive attitude and had that belief that we could do it,” he said.

The message that remained with Moore the most was the importance of treating an intimidating opposition just like everyone else.

“[They said] the hardest part about winning a premiership is getting into it,” Moore said.

“Once you’re there you’ve got just as much chance as the other side.

“It’s just 22 versus 22 and whoever wants it more will come away with the premiership.”

The young side did have some premiership players from 2006 in their ranks, and Moore said that helped ease the nerves as he went into his first senior final.

It was the first five minutes that were the most brutal for the teen, he said.

“After the first five minutes, everyone was buggered, but once the game went on,  it kind of turned into a normal finals game,” he said.

“That first five minutes of finals footy is the most intense of all year.”
For the first half, the Palm Beach powerhouse was having it their way, and led by 30 points at the major break.

Coach, Paul Grentell, just told them to stick it out, Moore said, and that’s exactly what they did, led by Ray Poulter medallist Jimmy Rozynski, whose game went to another level in the second half.

“In the third quarter, we really turned it on and started to win the ball out of the middle and that’s when the game turned around,” he said.

“I think the general feeling was that we could do it.

“We knew it was going to be tough, but belief was always there and we just had to stay true to it and keep playing for the four quarters.”

And it took almost the entirety of those four quarters for the Magpies to take the lead, ino time on in the last.

Scott lived out every player’s dream with the match-winning goal, which followed a dramatic final five minutes.

The dual-premiership player took a mark in the dying stages, in a pack that crashed down onto David Hamill’s ankle, requiring a stretcher and the game stopped for five minutes.

That five minutes gave Scott plenty of time to think about the importance of his kick, and he said those moments were probably too long.

“I had a lot of time to think about it and the pressure built up and I thought we’d lost the game (when I missed),” he said.

But, the footy gods had other ideas and fortune turned Scott’s way.

“As fate would have it, I got another opportunity and made the most of it,” he said.

“That’s what you dream about as a little kid.”

There was time for one more stanza in a gripping match, as the Lions won the next centre clearance, and Scott could only stand and watch from the forward line.

“It was very nerve-wracking,” he said.

“When they got that last centre clearance, I was up the other end and I was just hoping our backmen would stand up like they did all day.

“I was so glad the siren sounded when it did.”

Overcoming the side that had beaten them in 2007 after coming in as rank outsiders made it al lthe sweeter for Scott.

“They were definitely the form team of the year, they were so strong,” he said.

“Even being more than six goals down, we just kept persisting and digging in deep and fighting through the pain barriers and thought they would eventually crumble, and they did.

Thanks to the Western Magpies and Queensland Footy Forensics for supplying information about the grand final for this story.