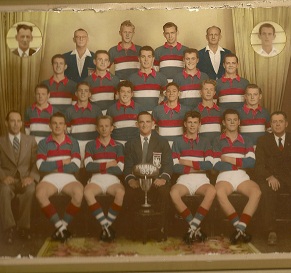 Mr Flanagan played in that team and it aroused his curiosity. ‘What has happened to all those former teammates’ he wondered.

He contacted Queensland Newspapers managing sports editor Brian Burke – a longtime follower of the old QAFL – by email, who forwarded the request to AFLQ to see if any living players in the photo would contact Mr Flanagan.

“The President at that time was A. Cuthbertson.  We practiced at the Yeronga field and when my wife and I were down visiting two years ago we see it now as a rugby union field,” Mr Flanagan wrote.

“I lived with a working class family in Lang Street (has a different name today) which was at the end of the Dutton Park tram line.”

Mr Flanagan played in the Yeronga Under 18s at the same time he started an electrical apprenticeship with the Brisbane City Council.

A former Masters marathon record holder and university lecturer-turned Subway restaurants proprietor, Mr Flanagan can be contacted on bonev42@yahoo.ca by any of his old teammates.