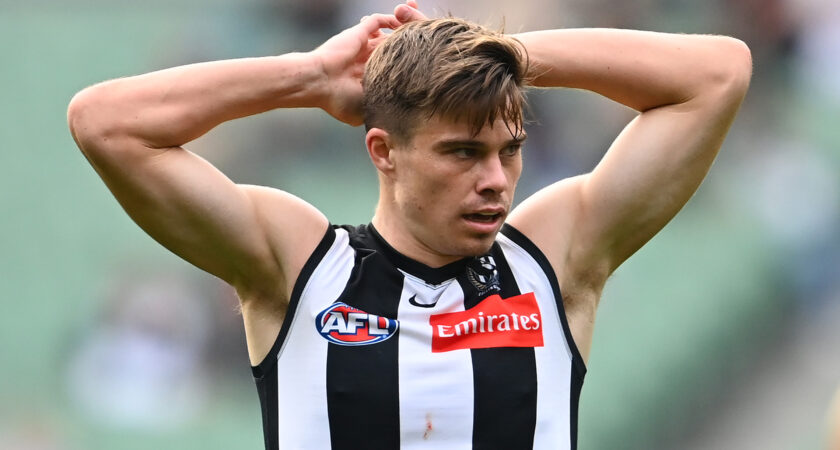 In an AFL career which has already tossed up more different things than he might have expected Josh Thomas is set to experience something entirely new and different.

After playing his 115th AFL game in Collingwood’s traditional Queen’s Birthday clash with Melbourne on Monday at the non-traditional venue of the SCG in front of a non-traditional crowd of 16,453 he will begin ‘LAB’. Life After Buckley.

The former Morningside and Redland junior has played his entire AFL career under coach Nathan Buckley, who has split with the Magpies after 10 years and 218 games at the helm.

And fittingly, as if in a show of appreciation for all that the 48-year-old club icon as done for him, he was produced one of his best efforts of the season to help send Buckley off with an aggregate 8-2 record in Queen’s Birthday clashes.

Thomas, with 16 possessions and three tackles, was an important contributor in a match transferred from the MCG to the SCG due to Covid problems in Melbourne in which 16th-placed Collingwood beat ladder leaders Melbourne 17 points.

It was the fifth Queen’s Birthday clash for Thomas, who was three injury-plagued years on the Collingwood list before his debut and sat out two years on a drug suspension. He had also played in the feature game against the Demons in 2013-14 and 2081-19.

The now 29-year-old has enjoyed some highlight moments in the eagerly-awaited annual battle. Like 27 possessions, two goals and a Brownlow vote in 2013 in just his seventh game in 2013, and 15 possessions and three goals in front of 83,518 people in 2018.

And while it was a shame only 16,453 people could attend the game in Sydney it will still go into the Thomas special moments file.

Now, after a welcome bye this weekend he will begin phase two of his AFL career under dual Brownlow Medallist and 383-game StKilda champion Robert Harvey, who will coach the Pies for the remainder of the season.

Thomas was drafted 12 months after Harvey played his last game in 2008 but knows him well, with Harvey having been part of the Buckley coaching panel at Collingwood since the 2012 season after earlier coaching stints at Carlton (2009-10) and StKilda (2011).

Interestingly, Harvey will make his coaching debut in Round 15 against Fremantle despite the fact that this is his second appointment as an AFL interim coach.

He was also appointed interim coach at StKilda in September 2011 after Ross Lyon quit the club but his time in charge was over before Christmas. When Scott Watters was preferred to Harvey as the Saints’ senior coach for 2012 Harvey was granted a release to join Collingwood.

He started with the Magpies as midfield coach under Buckley and after being promoted to senior assistant coach during the 2013 season he won the 2013 AFL Assistant Coach of the Year award.

On Monday Thomas climbed to equal-fourth all-time on the list of games played in the #24 jumper for Collingwood, joining 115-game 1950’s star Frank Tuck after passing 110-gamer Andrew Ireland, ex-Lions CEO and AFLQ Hall of Famer, earlier in the season.

But having played in the 2018 grand final he will hoping the #24 grand final curse that struck Tuck and Ireland, who played in seven grand finals between them without a win, doesn’t linger any longer.

The only two players who have worn #24 for Collingwood more often than Thomas are 160-gamer and 1990 premiership player Jamie Turner, and 227-gamer Tarkyn Lockyer, whose only taste of grand final day was a loss in 2002.

In the only other Queensland highlight from an abbreviated Round 13, Charlie Dixon celebrated his 100th game for Port Adelaide with 12 possessions, four contested marks and a season-high four goals in a 21-point loss to Geelong at Adelaide Oval.