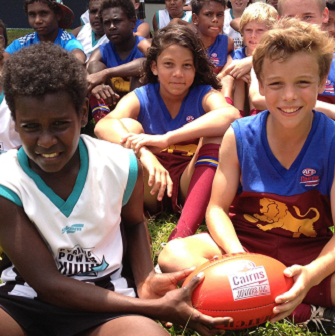 AFL continues to grow in North Queensland with an AFL first for Innisfail, just south of Cairns.

Despite having no local AFL clubs, an under 12 Innisfail team took on Gordonvale’s Pyramid Power under 12s last weekend.

AFLQ’s Development Manager for the region, Eddie Skiba, said there has been a strong primary school competition running in the town for a few years, but this was the first time a junior Innisfail team had played against a Cairns club.

Skiba said games like the one on Saturday aimed at providing more opportunities for players who had competed in the primary school competition to continue their AFL in a more structured club environment.

It is also hoped that it will begin to build a relationship between Innisfail and Cairns most southern club, the Pyramid Power.

“It would be fantastic to see Innisfail players getting involved with Pyramid Power football club or even forming a team or competition in their own right in the not too distant future,” Skiba said.

Pyramid Power were commended for their efforts in travelling to Innisfail in the off season to make this game a possibility.

This Saturday Innisfail will travel up to Cairns for a return bout against Pyramid at Cazaly’s stadium at 11.00am.