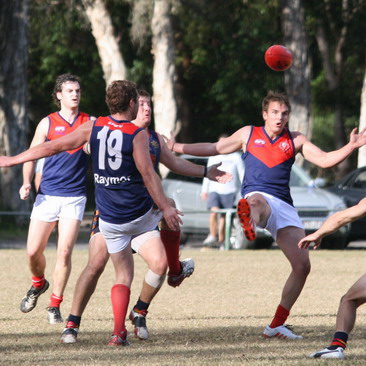 JUST as they promised to do, the Surfers Paradise Demons have had a major say in who plays where in the Pineapple Hotel Cup finals.
The Demons, who missed the play-offs by one win, upstaged Wilston-Grange in the final round of fixtures on Saturday, dislodging the Gorillas from the top- three and despatching them to a sudden-death elimination final away to Sandgate next Saturday.
Taking full advantage of their Gold Coast rivals’ success, Palm Beach-Currumbin surged into third place on the congested ladder, setting up a qualifying final away to Western Magpies next Sunday.
Noosa, who clinched the minor premiership after beating Mayne, have next weekend off to prepare for a second semi-final at home the following weekend.
On Saturday, Wilston-Grange fell to Surfers by 40 points; the Magpies thrashed Coolangatta by 132; Noosa downed Mayne by 83; Palm Beach-Currumbin downed Burleigh by 122; and Maroochy-Northshore scored by 20 points against Springwood.
Noosa (180.4 per cent) finished on top of the ladder on 52 points, level with Western Magpies (149.1), followed by Palm Beach-Currumbin (173.4), Sandgate (137.3) and Wilston-Grange (129.5).

DAN THE MAN WITH 10
By Terry Wilson

CLUB stalwart Simon Fenton dubbed it ‘The Dan Green Show’ after a superlative performance from the midfielder/forward for Surfers Paradise against Wilston-Grange at Hickey Park on Saturday.
The bustling Green, enjoying life back at the club he started with as a junior, turned in one of the best individual efforts of the Pineapple Hotel Cup season, kicking a career-high 10 goals as the Demons upset the  Gorillas by 18.14 (122) to 11.16 (82).
The result dumped the Grange out of the top three and down to fifth and they now go into an away elimination final against Sandgate on Saturday.
Alternating between the midfield and forward, the solidly-built Green was unstoppable, leading Fenton – himself one of the all-time greats at Surfers – to laud his team-mate.
At the after-match awards, Fenton said he had not witnessed a better individual performance and that it was great to be a part of the Dan Green Show.
Coach Beau Zorko was equally rapt in Green.
“He was brilliant and it was one of the more outstanding performances I’ve ever seen,” said Zorko.
“He certainly showed the way because the game was a bit of an arm-wrestle  and it see-sawed until the last quarter when Dan kicked a couple of goals to get us clear.
“In full flight he’s just untackleable, if there is such a word.”
Green, who used to play for Broadbeach in the QAFL, kicked seven of his goals after half-time and four in the last stanza, despite being in the midfield for 18 minutes of that term.
He missed the first nine rounds of the season after knee surgery, but has fired up since resuming and must be one of the main contenders for the Surfers best and fairest award.
From a club perspective it was a rousing way for the Demons to finish their year, deserving of a rating of being the best side out of the top three because, in nine games under Zorko, they lost only to Noosa and Palm Beach-Currumbin.
“It was a great way to finish and I’m happy for the boys because, as I said last week, they deserved more reward for their efforts,” said Zorko.
The final margin may have been 40 points, but that hardly reflected the closeness of the contest because, up until late, the Gorillas fought tooth and nail.
The loss of runners Chris Jaenke (hamstring) and Hugh Campbell (knee) in the first 10 minutes upset the rotation system of the Grange and left them with few options to counter the Demons, who did not have much height around the ground.
“Sometimes you play sides you don’t match up on well – and Surfers did not have many talls – and when we lost Jaenke and Campbell it left us too tall and we lost the run they provided,” said coach David Martin.
Unfortunately for the Gorillas, they now have lost skipper David Tough, Jaenke and Campbell for the rest of the season.
For the Gorillas, rover Rory Molan was best, ahead of full-back matt Pardew, midfielder Cale Agosta and defender Scott Wood.
Obviously Green was the standout for Surfers, who also had great service from makeshift ruckman troy Armstrong, Simon Fenton in the midfield and up forward and rover Jake Ryan.