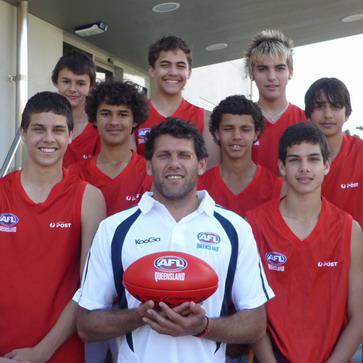 Brisbane Lions hero Darryl White has returned to Brisbane this week as part of a key initiative in the AFL’s wide-ranging Indigenous policy.

White has taken charge of the camp for 41 indigenous players from across the state as part of an enhanced AFL Kickstart program, which will see a new national U15 championship held on the Gold Coast at the end of the month.

White, 38, who has been playing this year at Swan Hill in country Victoria, will coach the Queensland team, with AFL Queensland staff including Marc Harbrow and Jesse Green to serve as his off-siders.

Included in the playing group at the camp are White’s two oldest sons – 14-year-old Darryl Jnr and 13-year-old William, who is the youngest player invited.

Speaking during the camp today, White told of his excitement at the opportunity the AFL Kickstart U15 Championships provides for young Indigenous players.

“Camps like this one are a great way for young Indigenous kids to develop both their football and personal skills,” said White.

“They meet other kids from across the State, learn from each other and experienced footy people running the program.

“To come away from home and get the opportunity to spend two days on skills that will help them in life, no matter how far their footy takes them, is fantastic.

“Statistics tells us one or two of this group will play AFL footy so it’s great opportunity,” he said.

White stressed, though, that the camp wasn’t all about football. It was also about helping in the players’ of-field skills and their personal development.

“We’re talking to them about drugs, alcohol and leadership, and how being a good person is just as important. When these guys go back to their communities they need to be good role models and good leaders,” he said.

The camp is being held at AFL Queensland’s new training and administration centre at Yeronga yesterday (Monday 15) and today for players from Cape York, Cairns, Townsville, Gladstone, Hervey Bay, Brisbane, Gold Coast and the northern rivers of NSW.

Injured Lions player Xavier Clarke conducted a leadership session last night, while the itinerary has included a day of high-performance testing, a practice match and a series of off-field lectures covering respect and responsibility, personal development and character building.

Participants have been selected on criteria including leadership qualities, school attendance, community involvement and football ability. The young men attending the Indigenous selection camp at Yeronga, with their ages, have been:-

The Queensland team will be announced later this week, with the AFL KickStart Under 15 Championships to be held on the Gold Coast from Wednesday 31 August to Sunday 4 September.

The Championships will engage 150 Aboriginal and Torres Strait Islander  young men,  representing all states and territories, making up six teams of 25 participants each.

The Championship is an expansion of the annual KickStart camp which involved 50 participants..

According to the AFL’s national media release, players are selected on criteria consisting of leadership qualities, school attendance, community involvement and football ability. State KickStart camps, like that held at Yeronga, have been conducted to select teams.

AFL National Community Engagement Manager Jason Mifsud said the KickStart program will continue to use Australian football as a vehicle for education, employment, health and participation outcomes for Indigenous people

“KickStart’s  expansion will enable us to grow the pool of talented Indigenous footballers, and equally important, it will further expand our engagement with Aboriginal and Torres Strait Islander  communities and enable us to continually deliver broader social value

“The Championships will also provide further development opportunities for other parts of the football industry such as umpiring, coaching and administration with local Indigenous people engaged in these leadership positions for each team,” Mifsud said.

“Holding the Championships on the Gold Coast is also a very significant engagement opportunity for us. With some 60,000 Aboriginal and Torres Strait Islander  people living in the South East Queensland region, the feedback and support from the local community has already been excellent.’

During the Championships participants will meet Indigenous AFL players and engage in leadership seminars.

The best performing teams will play in a curtain-raiser prior to the Gold Coast v Hawthorn match at Metricon Stadium on Saturday 3 September.

At the conclusion of the Championships, 25 players will be selected for the 2011 Flying Boomerangs squad. The squad will tour Fiji in December this year.