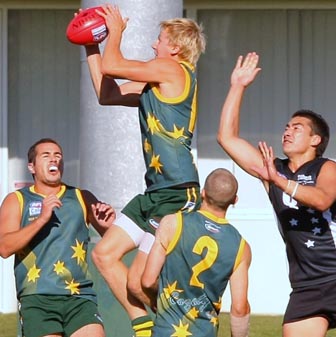 Ten State League players are fighting for six berths in the Queensland Country side to contest the national championships in Canberra next month.

Ten State League players are fighting for six berths in the Queensland Country side to contest the national championships in Canberra next month.

The 30-man squad released last week will be pruned back to 25 in the middle of July, the week before the team contests the Australian titles from Thursday 22 to Sunday 25 July.

The five to miss will be mostly State League calibre, with the Queenslanders allowed no more than six QAFL based players who are originally from the country.

Matt Fife, Sam Brown, Josh Brown, Jesse Derrick, Blake Passfield, James Rozynski, Tyson Upton, Josh Norman, Nic Tomlinson and Glenn Screech are all top talents in the QAFL and the final six who make the side will be pivotal to the Maroons’ chances of a competitive effort in Division One.

Former South Cairns coach Stephen Daniels, now based in Victoria, will coach the team, with the assistance of Paul Grentell, Mark Mooney and Kevin O’Donohue.

Last year’s Aspley best and fairest winner Lucas Matthews is likely to be one of the first players picked, showing he has lost nothing in his drop back to Pineapple Hotel Cup with a medal winning performance in the Stockmen v Cairns game 10 days ago.

The Country squad is: