FIELD STEPS DOWN FROM TIGERS JOB 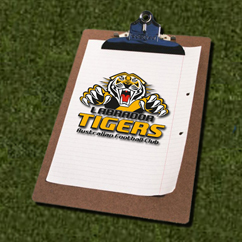 The Labrador Tigers AFC today confirmed that senior coach Jarrod Field has stepped down from the position to spend more time with his family.

Field guided the Tigers to easily their most successful season in history this year, reaching their first QAFL grand final and going agonizingly close to a premiership.

A perfectionist with his commitment to the coaching job, Field found the time requirements too much to juggle with helping raise three young sons under the age of six.

“Jarrod has done an outstanding job over the last two seasons and has made the tough decision due to family reasons,” club development manager Ryan Kogelman said in a prepared statement.

“Jarrod has been instrumental in the club’s development both on and off the field.

“Jarrod has been nothing short of brilliant in his professionalism and passion for the club, from the first day he took the job he has given everything to the overall improvement and development of the Labrador AFC.

“We thank him and his family for all they have put in and wish them all the best for the future.”

In an unprecedented start to spring, all three Gold Coast clubs are now seeking coaches, with Southport and Broadbeach also in the market.

“The club is in a great position for 2011 with an overwhelming commitment from our current and new sponsors and a number of players recommitting for next season, so there is a great opportunity for the successful new coach for 2011,” Kogelman said.

“The committee is extremely confident that they will have exceptional replacement for Jarrod very shortly and we look forward to that announcement in the coming weeks.”