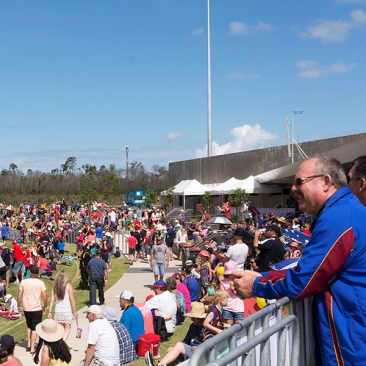 It is half-time in the NEAFL practice match at Burpengary, and Brisbane Lions vice-captain, Tom Rockliff is having a kick of the footy.

He is not with a teammate or a coach, but rather an eager balloon-hatted youngster decked out in Lions gear.

AFL players and fans mingled as the Lions reserves took on Aspley, and their senior players posed for photos and conversations in a day when only a mesh divider separated fans from players, as they strapped up and prepared and from coaches strategizing outside their change rooms.

While the AFL practice match was the main event, it is another group of Lions who the day meant the world to.

In the lead up to Saturday’s official venue opening, Caboolture Lions coach, Shane Pleming, likened their new home to being moved from the pool house to the penthouse.

Preparing in elite facilities was a far cry from their previous home and one which will hopefully keep their club thriving.

Those Caboolture Lions have the first say on the day, after a rough and tumble local derby against Redcliffe.

The bigger bodies of amateur footballers mean desperation tends to supersede finesse, but the spectacle is no lesser for that fact.

Concurrently, the Lions reserves take on the Aspley Hornets, in a grand final rematch.

A Hawthorn fan and recently new Runaway Bay resident came all the way north to get a glimpse of the Queensland footy scene and a small idea of how his former marquee man would look in Swans colours.

He asked about the line-ups and both teams and looked on in amazement as the Hornets stole the show.

And on the far side of the field, a line of blue figures can be seen as the Lions senior coaching panel keep an eye on things.

The NEAFL wraps up, but the oval is still surrounded as Caboolture’s women collect not just their first Burpengary win, but the first in their history, in front of their biggest crowd.

As the Lions and Swans move into the main oval, their assistant coaches and AFL officials taking the place of team managers and a sole interchange steward, the feeling doesn’t much change.

Families occupy the hills, as children’s energies wane and they settle in for the main game.

As the Swans take the honours, a swag of Lions players make their way around the ground signing autographs and talking to people, before members and Caboolture juniors present them with their jumpers.

Off the ground, the cast is stellar, Dr Eve Fesl, a woman whose list of ground breaking achievements puts most to shame, delivering the Indigenous welcome to country and cutting the metaphorical ribbon on the precinct,

Many of the AFL practice match venues signalled a return to suburban grounds that hold so many memories for people there.

Grounds like Punt Rd and Princes Park, which have played host to some memorable footy moments.

It’s all too rare for fans to see AFL at these grounds, but it’s even rarer to be there as those moments are made.

The Brisbane Lions christened the Moreton Bay Regional Sports Centre- AFL Precinct, but it was only a small part of the event.

It will be that kid kicking with Rocky, the Lions who claimed victory and played curtain-raiser to an AFL match, and the 6,096 people who made the trip who will tell the real significance of the day.