Effectiveness key to U18 title chances 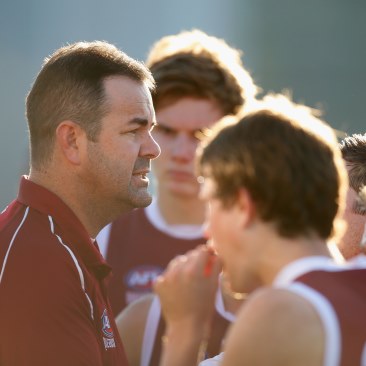 The Scorpions will look to finish nationals on a high, against NT tomorrow.

You don’t normally hear teams criticised for being too perfect, but that is exactly where Queensland U18 Scorpions coach, Ray Windsor, says his side is going wrong.

The Scorpions have started on the back foot in a number of matches this season, including last weekend’s rousing win over NSW/ACT, and Windsor said it came down to prioritising perfection over effectiveness.

“They try to be too perfect early instead of being effective and just getting it to space,” he said.

Windsor said the NSW/ACT game showed the Queenslanders their capabilities and they would be looking to continue that momentum against the NT.

“To string together an almost complete quarter, with not many mistakes …it’s pretty satisfying for them to realise how good they can be if they put their mind to it,” he said.

“We’re definitely confident going in (to NT) but not overconfident.

“They’ve got the leg speed and skill to take it up to us, but we’re not going to allow them the time and space to get over us.”

As well as some handy momentum, last weekend’s win kept Queensland in the running picking up its first Division Two title since 2006.

It’s a complicated road to the championship with the Scorpions needing to beat NT by more than 110 points and then relying on NSW/ACT to dominate Tasmania in the region of 70 points.

Regardless of that equation, the chance to finish nationals on a high would be enough motivation for the Queenlsanders, Windsor said.

“This is the last time this group will ever play together. You never want to leave it on a sour note,” he said.

“They don’t get the chance to redeem themselves after this so they need to put all their time and energy in and make sure every effort counts.”

Aside from NT standout Erin Wasley-Black, the Scorpions will need to be wary of speedy midfielder Daniel Cox and Nakia Cockatoo.

With a clear height advantage over the Top Enders, the Scorpions will be looking to their big men to capitalise on that, Windsor said.

“We need to focus on getting the ball into the air and relying on our big guys to take the marks we need them to take.”

Queensland will be looking to players like Cain Tickner and Aden Rutledge to use their size to their advantage in the game, and continue their good recent form.

While the equation for the title might be intimidating, Windsor knows exactly what he wants from his charges in their nationals swansong.

“Our objective is to win by a lot.”

The Scorpions take on NT at Victoria Park tomorrow at 11am in Round 5 of the NAB AFL U-18 Championships.