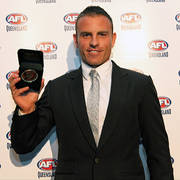 9:48pm: That’s the end of a pretty great way to celebrate the 2013 season. Thanks for joining me and have a great Monday night.

9:46pm: And the night ends with a cheer for the umps and a thankyou to the brilliant MC, Adam.

Bring on the prelim.

9:45pm: Murphy praises the Queensland weather and says he’ll be sticking around for a couple more seasons.

Jimmy Rozynski and Caleb Brown on 13.

Mathew Stevens and Mark THompson on 15.

9:39pm: Final round is almost up. Winner so close. I’ve thrown my calculator out the window, because it’s simply too close to keep up with.

Matt Trewhella takes the final top votes of the season, and we’re about to head to the leaderboard.

9:35pm: It’s still looking pretty close and there’s a hush over the room that sounds like many tables trying to keep track of votes.

9:32pm: Coolangatta’s David Lynch has picked up a few tonight. THere’s a theory that says winners are standouts from mid-range teams. Could Lynch prove that?

9:31pm: Up to Rd 14. Biggest cheer of the night goes to Jackson Emblem from PBC – not sure if that was because of him top voting or his speedy recovery from a foot injury last weekend.

9:24pm: Maroochydore’s Michael Roberts has another three votes and then the Big dog Michael Cunningham picks up another top billing. Still no standout.

9:22pm: So that ‘five’ minute break is over and we’ve got five rounds to go. Home stretch now.

9:12pm: Volunteer of the year goes to Maroochydore’s Craig Scrase

9:11pm: King thanks Cresswell for support during the year, and congratulates his guys who have undergone a massive turnaround this season.

9:06pm: Coach of the team of the year , to minor premiership mentor, Tony King.

And Grange’s Steve Brittain is the captain of the team of the year.

No outlandish outfits fro mthe team of the year- a couple of anorexic-looking ties, though.

8:59pm: Team of the year announcement coming up, line by line. Man of the moment – Simon Devine – is coming up to announce the team.

Mathew Stevens (Grange) is one behind, while Maroochydore captain, Michael Roberts is third, with 11.

Five rounds to go. Who’s going to take it out?

8:54pm: Springwood’s Josh Brown takes the cake for the biggest troll of the evening, with an intense headshot.

8:53pm: The vote readers are slowing things down now – the suspense is killing me.

8:50pm: We’re in round nine and my maths is pretty terrible, but there’s no runaway winner according to my calculations just yet.

8:46pm: Biggest laugh of the night for Clint Cassidy, whose full name came up as a top vote-getter. Guess he doesn’t get that often.

8:44pm: Brittain thanks his coaches, and is crossing his fingers for a few more umpire votes as the night goes on.

Could Britts make it a double tonight?

8:26pm: As the votes are being read out, I’ve had a chance to glance around the room. Reckon the top votes for most casual table would be Palm Beach. Some lovely patterned shirts out on that table. Props for statement dressing.

8:22pm: There’s always one loud table, and this year it looks to be Surfers. Heckling or cheering their teammates, they’re enjoying themselves.

8:21pm: There’s a bit of extra pizzazz in the slideshow this year, with headshots for top voters. Been a few good road trips to get these, and if I do say so myself, they look pretty good.

8:19pm: We’re back, and I can say the chicken main was delicious. Food going down well tonight – the complimentary nature of it definitely sweetens the deadl.

The main count is about to get underway. First six rounds out of the way first. Bring in the umpires. And I can officially report, Pierce Field’s hair has not shifted this entire night. Impressive.

7:54pm: Break for mains and a beverage. I’ll be back with the main event very soon.

7:53pm: Western Magpies have taken out the Alpha Sport Club Championship, for their performance across colts, ressies and seniors today.

7:51pm: Corrie doesn’t miss his chance to give his mids a bit of advice, askign for some better delivery.

And Corrie is looking very sharp – in a pink shirt with some lovely taupe slacks. As you can tell, I’m well-verserd in sartorial lingo. Saddle in, there’s plenty more where that came from.

7:48pm: Greeny said he was surprised to be invited to the medal night, and simply expected a free food and some drinks, but he’s gone home with a major award.

Green is a pretty imposing figure and from all reports has been sensational in the twos this year.

Just in case you were wondering, the photo on this story is last year’s winner, Jake Ryan – no leaking here.

7:42pm: Just spotted a very impressive mo at the back of the room. Not sure who it is, but it’s a young fellow and he’s doing well, at least in the facial hair area.

Into the last round of reserves count now. Who’s going to take it out?

7:37pm: Massive groan from the Surfers table when Demon Chris Kranz picks up top votes – great to see he has plenty of support from his teammates.

7:32pm: Picking up the count from Round 11, and Surfers’ Chris Haddock leads by one vote.

Reeves and Field to pick up the count.

7:30pm: We’re on to the reserves now. Leading goal kicker goes to……Bryce Dyer from Palm Beach. Dyer claims it with 65 goals, 26 more than his closest competition.But Dyer couldn’t be there and a unit of a substitute accepts the award on his behalf.

7:29pm: The youngster reckons his year was alright and says his  highlight was a win at Fisherman’s Rd over Maroochydore.

7:24pm: Angus Hubert has run away with it. He has claimed the award by 13 votes, over Adam Tipungwuti.

7:22pm: The umpires have started off well. They’ve obviously been practising these names, there’s some tricky ones in there.

And we’ve got the super duo, Andrew Reeves and Pierce Field up to read out the votes.

Gotts kicked 47 goals in a super season, including a bag of 10 against Palm Beach.

The teen credits his coach with helping him to kick straight.

In other news, the Asian chicken salad is pretty delicious. Definite win.

AFLQ CEO, Michael Conlan is about to jump up and welcome everyone to the night.

Stay with me for updates and commentary through the night.

About to tuck in to my chicken salad, so give me a couple of minutes.