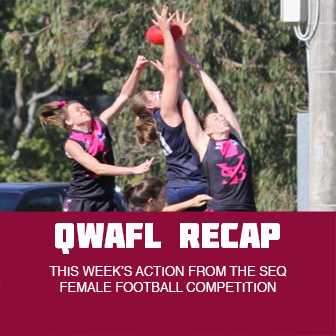 Rising star, Jade Ransfield was the best for Yeronga in the win, with coach Fred Mellings, impressed with their younger brigade’s performance in the match.

“I was excited with the prospect of our younger players,” he said.

“We were accurate in front of goals and wanted the footy the most.”

Eagles coach, Jacob Simmons-Bliss, was proud of his team’s performance, despite the loss.

The reds played a loose player in defence, but that didn’t seem to worry the navy Roos, who stuck to their guns in the dominant win.

Megan Hunt and Sally Young were impressive for the home side in the win, while Ainslie Sims worked hard for the Reds all day.

In a Sunday twilight thriller, UQ clinched its second win of the season, over Wilston Grange.

Trailing by three points at the final change, the Red Lionesses took advantage of the wind in the last term to clinch the win.

UQ’s desperation for the footy and strong tackling pressure proved the difference in the match, with the young side first to the ball for most of the match.

Gorillas coach, Ron Kemp, said two weeks off had caught up with his side, who had a sluggish start.

“That break showed as we didn’t get up and running until the second half and we played catch up,” he said.

Gorillas fullback, Shannon Campbell, was rock in the team’s defence, while Gaelic convert, Eimar Nolan, had a sensational game for UQ, playing on ball.