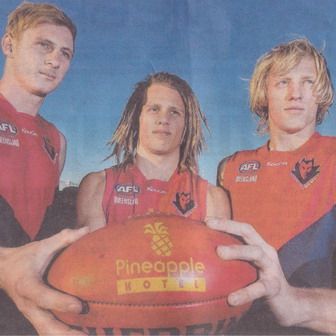 The Surfers Paradise Demons have a triple threat hiding in their senior ranks.

Call out “Haberfield” at a Surfers Paradise Demons home game and you’ll probably get more than one response.

Brothers Jesse (21), Brody (18) and Cassidy (16) Haberfield played alongside each other for the first time in the recent Demons home game against Noosa.

Dad Brendan is also a four-time premiership winning coach and mum Gayle has been a team manager for several of her sons’ teams as well as secretary of the Surfers Paradise Junior Committee.

It’s safe to say the Haberfields have Demons in their blood, with all three sons making their way through the clubs junior teams.

The game against Noosa was Cassidy’s senior debut after being named as the Most Valuable Player for the Queensland Under 16 Scorpions at the national championships earlier this year.

He follows in the footsteps of older brother Brody who also made his Demons seniors debut at just 16.

Oldest brother Jesse was one of the first three players signed by the GC17 bid team in late 2008, playing with the Gold Coast SUNS during their time in the TAC Cup and also undertook at stint at the AIS.

“It is a pretty unique occurrence to have three brothers, all under the age of 22, playing senior level football in the same team,” Surfers Paradise senior coach Beau Zorko said.

“Jesse, Brody and Cassidy are all terrific students of the game and the football club looks forward to nurturing and developing their talent in the years ahead.”

The Haberfield boys continue to cause headaches for their opposition in the Pineapple Hotel Cup with all three being named in subsequent Demons seniors teams.