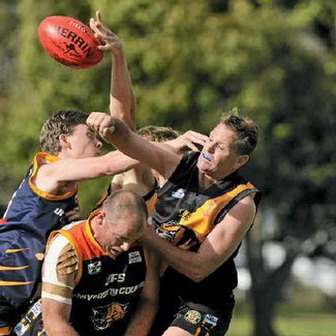 Cougars Look to Climb a Wall of Tigers

It’s déjà vu as the Cougars and Tigers meet in yet another final.  The Tigers were the team that knocked out the Cougars in last years Prelim by just 3 points, so the Cougars will be keen for revenge.

The Tigers have traditionally had the wood on the Cougars who seem to shut up shop in the face of a growling opponent.

This match can just as easily resemble a battle royale in the wild.  The Tigers attack the ball harder than their moniker attacks a wild bison while the Cougars rely on their pace in the expanses out wide to chase down their prey.

With these two contrasting styles, the team which performs the best will get their just desserts, probably in the form of some deflated human beings.

The Tigers have twice defeated the Cougars this season.  The Round 4 saw University struggle to field a team and the Tigers pounced on the opportunity, running out to an 86 point victory.

The Round 13 matchup saw a fantastic contest up until half-time when the Pinkies got over the top of the Eagles.

Andrew Wickes was superb in this match both up forward and down back; however his 5 goals for the match had the most impact.

The injection of Nic Upton also provides the Tigers with some pace and skill from across half back.  Along with Stephen Harbort & Michael O’Donoghue Junior, the Tigers know Rockville Oval and set up the wall very well.

The Cougars struggled to negotiate this wall last time, especially as they ran out of legs after repeated injuries.  Josh Timmer will need to direct his troops a bit better as they try to clear the ball out of the backline and the crumbing & running work of Luke Brumley, Ash Harley & Christopher Davis will need to be up to par for the Cougars to try and make the Preliminary Final.

Will the Tigers continue on their run to a third straight premiership or will the Cougars fall out one week earlier than the past two seasons.

It will ultimately come down to the Tigers wall versus the Cougars ability to negotiate said wall to see who will continue on and who will look to Mad Monday, followed by 12 months of solid work to redeem themselves.