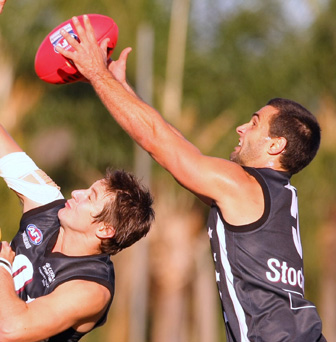 Queensland lost the playoff for third but still performed well against the top States at the Landmark National Country Championships.

Queensland finished a credible fourth at the Landmark Australian Country Championships in their return to open company last week.

Despite having been beset by injury in the lead-up to the carnival in Canberra, the Queenslanders jelled nicely under coach Steve Daniels to deliver a string of competitive performances.

The Maroons’ high and low came against the same opposition, the Australian Capital Territory.

The home territory went into the championships as favourites alongside Victoria’s main team, but plummeted out of grand final contention with a shock six-point loss to Queensland midway through the second day.

The first six games were played as two 17-minute halves and Queensland were able to go blow-for-blow.

However, the playoff for third and the grand final were both full 120-minute affairs, and the ACT’s superior depth came to the fore in the longer version when they fronted Queensland in the re-match last Sunday.

The ACT were bent on revenge after being denied a grand final opportunity at home and blasted eight goals in the first quarter to propel them to a 25.9 (159) to 8.5 (53) victory.

The carnival was a personal triumph for both Lucas Matthews and Caleb Brown.

Matthews had the honour of being the only Queenslander named in the All-Australian team at the conclusion of the championships, while Brown was desperately unlucky to miss out.

He had to be content with being named the Queensland player of the championships.

Matthews resides at Noosa and has been a star for the Tigers for two of the past three seasons. In between, he won Aspley’s best and fairest award in the first season in the QAFL competition last year.

Brown has been consistently good for the Mayne Tigers in the Pineapple Hotel Cup, despite the black and golds struggling for wins in recent seasons.

There was also cause for celebration from the Queenslanders for David Silver, who was named umpire of the championships.