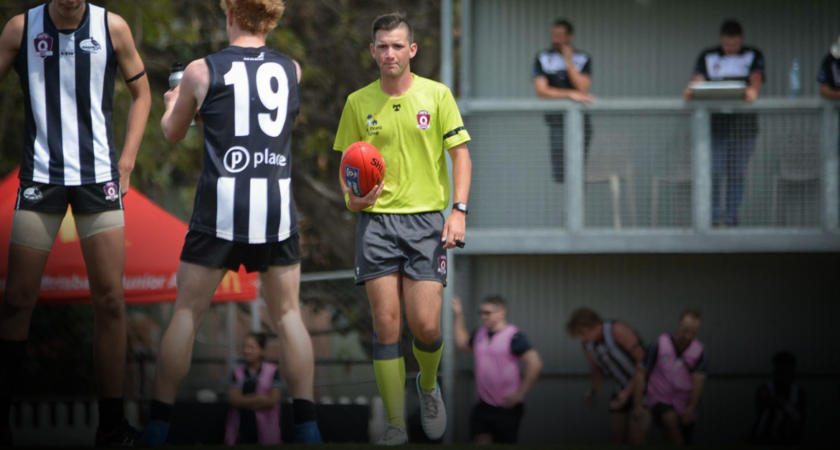 “The best seat in the house,” is how QAFL umpire Jacob Severs describes his position within the AFL Queensland community.

When you think of AFL stakeholders, the players, coaches and supporters first come to mind.

However, one of the most vital in keeping the game moving, yet the most forgotten, are the umpires.

Their decisions, calls and perspectives, whether accepted or not, decide the fate of this sport and without their contribution the league would crumble.

This week AFL Queensland are focussing their attention on the unsung heroes of the game with Community Umpiring Week.

Throughout the week, community football players have been invited to attend community umpire training sessions, providing the opportunity for players to see the game through an umpire’s lens.

All players and coaches are encouraged to shake their umpire’s hands post-match.

This initiative aims to support umpires at the grassroots of the profession, by creating a positive match day environment to retain and recruit umpires.

Jacob Severs, who began umpiring in 2014, made his QAFL debut in round two of this season and in 2016, claimed the title of Brisbane Juniors Umpire Rising Star.

Currently a member of the NEAFL Development Squad, Severs expressed his excitement going into the umpire’s round.

“We have a chance to be recognised through these rounds, and it’s a really good opportunity for us [umpires].”

Beginning in the sport as a player, Severs tried his hand at umpiring at the Junior level in 2014 and hasn’t looked back since.

Selected as a member of the 11-man Queensland State Umpiring Academy, Severs’ hopes of eventuating to the NEAFL and AFL competitions are looking within grasp, demonstrating the prospects this privileged job holds.

For more information on becoming an umpire, click here for registration details.