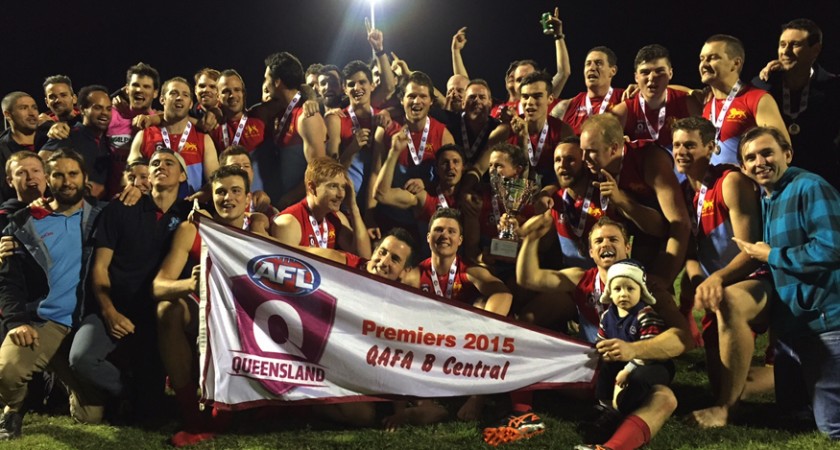 A stunning first quarter where they pilled on four quick goals before Maroochydore could settle, has seen Aspley walk away with the 2015 Colt North Premiership cup.

They set the tone early, especially around the stoppages, to open up a 24-point lead by quarter time.

Maroochydore worked themselves into the game in the second quarter, with Baiden Howard was leading by example, but they couldn’t eat into the lead.

Aspley slightly extended their advantage at every change, eventually running out 52-point winners.

Samson Lowney was named best on ground for the day. He was instrumental for Aspley early.

Kedron started the game like a bull at a gate, kicking unanswered goals in the opening term, to lead at the first change by 42-points, and signs were very ominous for the Woodsmen.

To their credit, they slowly worked their way back into the game, but needed another quarter. Not to many teams lets a six goal advantage slip on the big day.

You can read the full blow by blow account of how it unfolded here: https://aflq.com.au/live-715pm-qafa-b-central-grand-final/

Maroochydore made certain of what many predicted mid year, a grand final matchup against Mayne.

While the win was comfortable in the end, it was much closer than the scoreboard suggests.

Noosa’s second half of the first quarter was the best footy they played all day. They kicked the last three, which included a couple to Brain, to lead at the first change by eight-points.

Maroochydore wrestled back control in the second by getting on top in the middle. They were able to respond to every Noosa goal with two of their own.

After hitting the front late in the second quarter, they were able to slowly extend the margin for the rest of the day, eventual 43-point winners.

They take on Mayne this Saturday

Another week, another Springwood and Coorparoo game decided by a kick.

This time, it was Springwood who turned the tables, becoming the first team in 2015 to knock off Coorparoo. What a time to do it.

A combination of Coorparoo being a little flat early after the week off, and Springwood raring to go from the opening bounce, saw the Pumas turn it on early.

They kicked seven of the first eight goals, which included four to Luke O’Shea, to leave the Kings on the back foot early.

A couple of late ones in the first and a much better second quarter saw Coorparoo reduce the margin to six-points at the main break.

A six-goal to three third term from the Pumas opened the game up again. With the Kings down 27-points at the final change, it was going to be a long way back.

To Coorparoo’s credit, they didn’t throw in the white towel and start thinking about next week; they came at the Pumas hard late.

After Springwood kicked the first, the Kings bagged the next five, but the deficit was too much to bridge.

Springwood got across the line by five-points, booking a Grand Final spot in two weeks time.

In one of the most open games that SEQ footy has seen this year, Burleigh took their second scalp of the finals series in as many weeks.

Their win over Kenmore means the Bears were forced to exit the post season without a win.

Burleigh started this week how they finished the week before, with a flourish of goals.

Their first two quarters yielded 16 goals to Kenmore’s six. That was the difference in the game really.

Kenmore came back at the Bombers in the second half, slowly eating in to the lead, but the Burleigh did what they needed to do.

Their 39-point win booked them a preliminary final spot against Coorparoo next week. The Kings better watch out, Burleigh has a full head of steam up.

The Southeast SUNS have more than staked their premiership claims in the last two weeks, proving too good for the top two teams.

Their win over Bond University on Saturday was the first time a team has been able to tame the Bull Sharks this year, ending their fairytale run.

There wasn’t much in it early, with both teams very accurate in the first quarter.

Bond controlled the ball early in the second, but couldn’t capitalise on the scoreboard, kicking 3.5 to the SUNS 3.0, meaning it was all locked up at half time.

The third quarter was when the SUNS stamped their authority, restricting Bond to a solitary point, while kicking 3.7 of their own.

In the end, the SUNS were 31-point winners. They are definitely peaking at the right end of the year.

Griffith Moorooka was never headed from the opening goal in their 29-point win over a gallant Carrara on Saturday.

They kicked four of the first five goals of the game to skip away to a 23-point lead at quarter time.

Despite the Saints best efforts to claw their way back, the Roosters were too polished, and too poised.

They kicked nine of the last 11 goals to put the game to bed, and can now look ahead to their game against Bond this weekend.

Moreton Bay showed why they are the team to beat in the QWAFA in 2015, with a 45-point win over Zillmere Saturday to advance to the grand final in a fortnight’s time.

They won all four quarters of the game, controlling the midfield and linking up well.

They will take on Bond University this week.

Bond and Jindalee could barely be split in the first half of this one, it was as tight as it gets.

With just three-point in it at half time, it was anyone’s guess as to who would win.

It was Bond’s defence, and their ability to spread on the rebound that proved the difference in the end, as they held the Jags goalless in the second half, while kicking 3.12 themselves.

The margin could have been much larger, but in the end they what was needed to advance to the second week of finals, where they will take on Zillmere for a spot in the grand final.

QWAFL Review: Round 19
Coorparoo look to the future