Combine call-up for Thurlow and Ellis 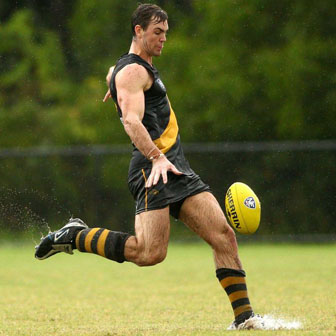 Labrador’s Fraser Thurlow and Broadbeach Cat Jarred Ellis are the latest Queenslanders to receive an invitation to the NAB AFL Draft Combine.

The two were not on the initial 98-player list to attend the national combine at Etihad Stadium in October, but strong form has seen them added to the group along with nine other players across Australia.

The pair join Aspley’s Jono Freeman and Mt Gravatt’s Archie Smith who were selected to attend the combine on the back of strong rep seasons.

Jarred Ellis
189cm/80kg
18/4/95
Broadbeach
Medium midfielder
Medium midfielder who is extremely agile, poised, is a neat kick and strong overhead. Takes the game on with his line-breaking ability. Played for Queensland in the NAB AFL Under-18s in 2012 with a shoulder reconstruction curtailing his progress early in 2013. His 21-disposal effort in round 22 against Gold Coast in the NEAFL was an impressive performance.

Fraser Thurlow
199cm/100kg
6/1/93
Labrador
Ruckman
Mobile ruckman/key forward who is strong overhead and reads the game well. Has strong work ethic and is extremely competitive by nature. Produced his best in a representative game between NEAFL and the SANFL at under-22 level with a best-on-ground performance having 20 disposals, taking 12 marks and kicking two