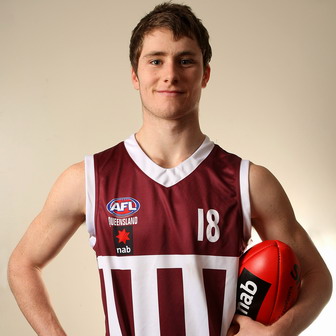 Mt Gravatt player Clay Cameron has received received an invitation from the AFL to attend the NAB AFL Draft Combine in October as part of the tall defender group.

Eighteen year old Cameron is an agile key forward who can also play in the backline.

He is strong overhead, with excellent natural leap and clean hands and a real competitor who had injury interrupt his start to the 2012 season.

The NAB AFL Draft Combine, involving 120 players at National Level, will be held at Etihad Stadium from October 2-5, with state Draft Combines to be held in Melbourne (October 6), Adelaide (October 13) and Perth (October 14).

The Tall Defender group comprises 23 players who and play predominantly defensive roles and includes one All-Australian in Jackson Thurlow from the NAB AFL Under-18 Championships and four players who are members or graduates of the AIS-AFL Academy.

“The Tall Defenders are extremely athletic with excellent rebounding skills and are strong spoilers with most also capable of playing roles up forward as well highlighting the versatility of this group,” said AFL National and International Talent Manager Kevin Sheehan.

In all, over 200 players have been invited to test at the NAB AFL Draft Combines with other positioned groups to be released as follows: