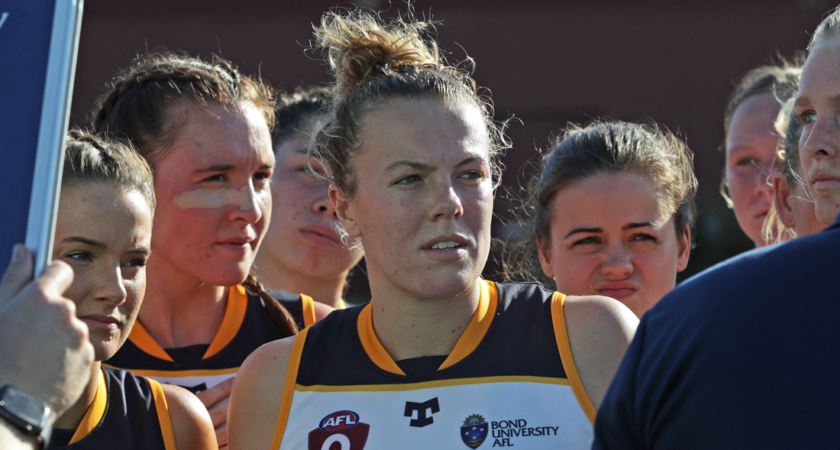 Leading into the QAFLW Grand Final this weekend, minor premiers Bond University reflect on the year’s rises and falls to prepare for a tough match against Coorparoo.

Only three weeks ago in Round 14, Bond University was left in the dust after Coorparoo’s three goal lead in the first quarter.

Although the Bull Sharks managed to pull it back to a close finish, Coorparoo still took out the win.

This is something which Bond University Captain Molly Ritson hopes can be rectified for Sunday.

“They won by three points, but we gave them a three-goal head start,” Ritson said.

“If we remember that and we’re quick off the start, hopefully we can have a different result.

Just like most QAFLW sides, Bond University has struggled with player availability throughout the season due to representative and AFLW commitments.

However as midfielder Georgia Brehmer explains, what sets Bond University apart is their team cohesion and a versatile squad list.

“We have such a deep list, and we can rely on any of the girls to come into our team. Throughout the year we might have had different teams, but we’re really gelled as a whole,” Brehmer says.

With 11 wins throughout the season, consistency is something Bond University does well.

Being able to draw on an extensive and familiar list of players means that from week to week you may see some different faces, but the team still gets the same result.

But it’s not only a the team-first sentiment of both Ritson and Brehmer that adds truth to the claim.

Bond University ranked equal first in the competition for the amount of different players they’ve used throughout the season.

In total, the Bull Sharks have had 45 different players feature in the QAFLW senior team, an accomplishment they share funnily enough with Coorparoo.

It’s a remarkable feat for Bond University who despite their significant turn over, have relished at the top end of the QAFLW standings for most of the season – something even Coorparoo, despite their Grand Final appearance this weekend – cannot attest to.

Ultimately, Bond University is looking to put the effort in on the day and reap the rewards of effective teamwork and effort.

“If we start hard and fast, we’ll be able to hopefully knock them off,” Brehmer said.

Bond University will play Coorparoo at 3:00pm this Sunday, August 25, at Leyshon Park, Yeronga, in the 2019 QAFLW Grand Final.