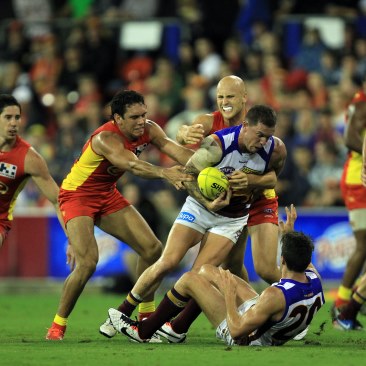 While Qclash6 will ultimately be decided by the players on Saturday, there are plenty of men in the coaching boxes who have just as much emotion invested in the result.

One of those is Queensland’s longest-serving footy players and the QClash medal’s namesake on Saturday, SUNS football operations general manager, Marcus Ashcroft.

Ashcroft, who until a fortnight ago held the Brisbane Bears/Lions all-time games record, has played a crucial role in the development of Queensland footy, since joining the then Brisbane Bears in 1989.

Playing in front of tiny crowds at Carrara in the Bears’ early days,  the Lions triple premiership player said he couldn’t imagine that Queensland footy would ever reach the heights it has now.

“I remember playing at Carrara in 1989, in front of 2,400 people and the majority would be ex-pat Victorians barracking,” he recalls.

“It’s come a fair way to what it is now. To have two sides, it provides a fantastic sight for QLD juniors and with two magnificent grounds; it’s an opportunity for fans, supporters and members to enjoy AFL footy.”

Having been closely involved with both Queensland clubs, Ashcroft was an obvious choice to name the medal after, and something which makes the game a little bit more special for the Queensland stalwart.

“It’s a privilege to have a medal named in your honour. It’s very humbling,” he said.

“I look forward to these games every time they come along.”

As well as top flight footy, Ashcroft said the two sides’ involvement with talent pathways has been a catalyst for Queensland player development.

“They’re putting an investment in looking at the kids. There’s definitely a clear avenue for kids and the SUNS and Lions provide a fantastic avenue for kids who have high ambitions with their sporting career.”

“A quarter of our list are Queensland bred players and of that, four players have come from North Queensland,” he said.

“We have an appetite to give Queensland kids a chance to play with the Gold Coast SUNS.”

Brisbane Lions assistant coach, Murray Davis has seen the growth of Queensland footy firsthand, having spent almost a decade playing for and coaching the Zillmere Eagles.

The growth of the second tier leagues, such as the NEAFL, along with the inclusion of the SUNS in the AFL, gives youngsters a clear pathway to follow, Murray said..

“It’s terrific for younger players coming through state leagues in Queensland , seeing that (the AFL opportunities) he said.

“I think it’s exciting and for any up and coming players to be able to see that at their doorstep.”

“The standard and professionalism (of the state league) is also really growing and it’s giving players involved more of a chance to being able to make the step into the AFL,” he said.

While both coaches agree that a good QClash is a good result for Queensland Aussie Rules, they definitely disagree on the outcome.

With the Suns sitting ahead of the Lions on the ladder for the first time leading into this local derby, it could be the most competitive of the lot.

Brisbane fullback, Daniel Merrett, looks likely to miss the clash through injury, a major blow for the side in its bid for a fifth straight QClash victory.

Ashcroft said the SUNS are in the best position to secure a win over their M1 rivals, since taking out the inaugural QClash in 2011.

“Our expectations have grown considerably. We’re expecting to win and our players expect to win,” he said.

“Ideally, we get a SUNS victory and a SUNS player win the medal but I‘m genuinely happy for the game to be a high quality one. It can only be good for footy in SEQ.”

Davis said he was looking forward to taking on the SUNS on Saturday.

“It’s exciting because there’s a rivalry there and for all those supporters , the last couple of games have been really close.

“There’s a lot to look forward to.”

The Lions host the SUNS in QClash6 at the Gabba on Saturday at 4:40pm.