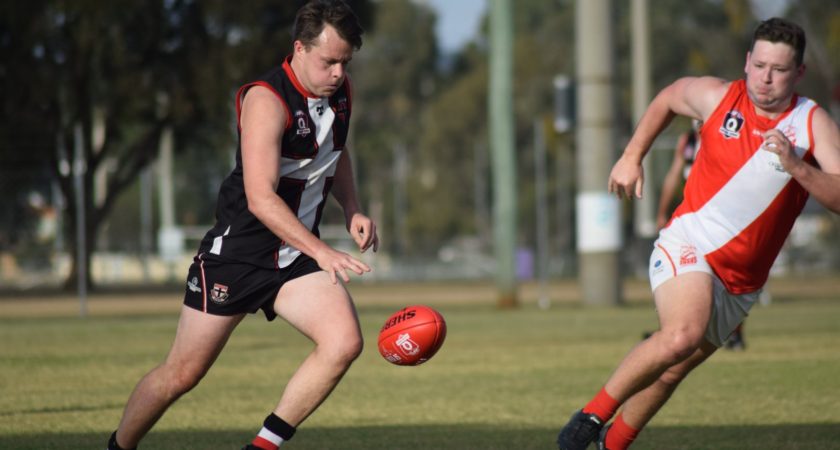 With the 50th Season of AFL Darling Downs now in the books, Senior clubs across the region have held their presentation nights to honour their players and volunteers after one of the most unique and challenging seasons on record.  We take a look at who took out each club’s senior Best and Fairest awards.

Coolaroo’s hard running backman, Corey Bellert took out the club’s top individual honour as he was crowned the Roo’s Best and Fairest on Saturday night. The award capped off a big year for Bellert, bringing up his 100th Senior game for Coolaroo this season and was rewarded for being one of the most consistent performers for the Roos all year being named among the best players in the majority of the Roos matches.

Dalby had an outstanding season returning to Senior Football and judged the Swans Best and Fairest was gun midfielder Jake Schreiber. The 2017 Swans Div 2 premiership player enjoyed his return to the club after a couple of seasons in South Australia and edged out fellow 2017 premiership player and current player/coach Brandon Peltz who finished runner up.

Jeremy Leahy took out Goondiwindi’s Senior Men’s Best and Fairest, the Murray Collet Medal, with Dave O’Toole and Jackson Allen finishing dual runner up. It’s an amazing 6th club Best and Fairest for Leahy who continues to push a case as one of the regions top midfielders of the generation.

With the 2020 Holman Medal and Heather Green Medals both ending up around the necks of Saints, some may have thought the Best & Fairest counts were already sewn up, however the club’s voting panel had other ideas. The hard-running Tristan Evert took out the South Burnett Men’s Best and Fairest after an outstanding season which saw him finish in the top 10 of the Holman Medal count also.

Kiara Wright and Laura Blackmore shared the Women’s honours after stellar seasons for the Saints, edging out the Heather Green Medalist Bree Pogany who finished as the club’s Best and Fairest runner up.

Premiership captain Bradley Knowles capped off a great year taking out the Bombers Best and Fairest Trophy after finishing 4th in the Holman Medal count. Knowles finished just ahead of the runner up Darby Edgeworth, who also took out the Ellen McConochie Medal for the player of the Senior Grand Final.

Tiffany Herdon was rewarded for her consistent efforts across the 2020 season, being judged the Bomber’s Women’s Best and Fairest player edging out up and coming star Coda Stanmore who was the club’s runner up.

After finishing runner up in the Holman Medal, gun Tigers Midfielder Jayden Smith took out the clubs Senior Men’s Best and Fairest after a sensational season of football. Fellow midfielder Ryan Cherry took out the Runner Up trophy.

Jemma Whitney was awarded the Women’s Best and Fairest, capping off a stellar season which included a 4th place finish in the Heather Green Medal, a Premiership medal and a Jeff Neumann Medal for Best on Ground in the Women’s Grand Final. It was another runner up trophy for Elisa Niki who finished in the clubs Best and Fairest number 2 sport after finishing runner up in the Heather Green Medal.

Tyhe Clarkson took out the Steve Gray Medal as the Redbacks Best and Fairest player of 2020. It was another standout season for the veteran midfielder, with this Clarkson’s 4th club Best and Fairest (3 Warwick, 1 University) knocking off Coen Slatter who was the runner up in his return to the club.

Coolaroo are the latest club in the Darling Downs to announce a new Senior Coach for the 2021 season, appointing former premiership player Miels Grice to take... [more]

Warwick have appointed one of their favourite sons to steer the ship in 2021, with Tyhe Clarkson being appointed to the Redbacks Senior Coaching role for the... [more]