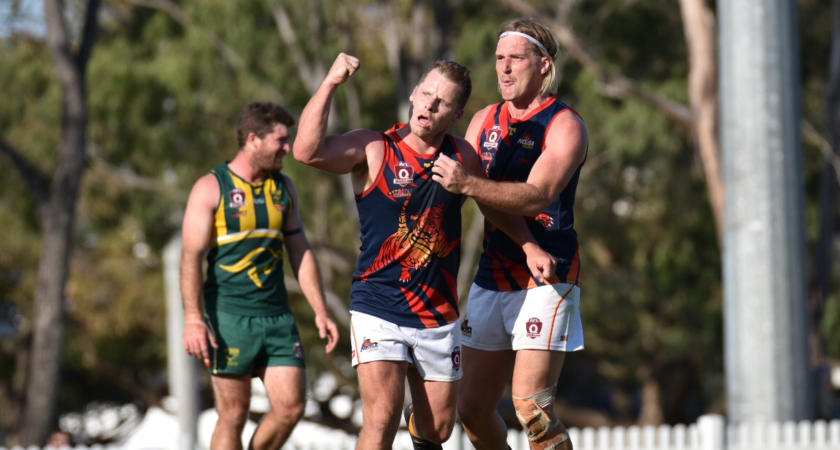 One year removed from their agonising one-point loss to archrivals Maroochydore in the same game, the Tigers ensured no such result would eventuate when the two side’s converged at Leyshon Park this afternoon, dictating play from the outset to win 7.7 (49).

The 51-point win was all but won in a rampant first half where they restricted the minor premier Roos around the contest and disallowed the trademark run and carry that has held the green and gold in good stead throughout the season.

The victory completes the Tigers’ narrative from their agonising loss one season ago, earning retribution against and archrival all while spoiling Maroochydore’s farewell game in the QFA before they join the QAFL in 2020.

Noosa coach Adam Bovalino, a former premiership captain with the Tigers, said the win was the reward for the playing groups efforts.

“It’s a lot of relief. I’m just so proud of the group and how they were able to come back from that Semi Final loss to Maroochydore a few weeks ago,” Bovalino told aflq.com.au.

“I think they beat us by around 42-points and then to turn that around today it’s just fantastic. I’m juts proud.

“I’ve played in a premiership here as a player and now I’m a premiership coach. It’s probably a bit more sweeter to win one as a coach.:

From the outside, it appeared Noosa were out to ensure a repeat of their 2018 heartbreaker wouldn’t ensue and it wasn’t long before that mindset was transposed on the scoreboard.

Noosa booted six of the first seven goals in an influential opening term that almost immediately placed the minor premier on the back foot.

The Tigers continue to dictate play around the stoppages, ensuring play would be held to tight around the contest where their big bodies in midfield could work hard to get clearances.

The play worked too, as Noosa held Maroochydore – despite all their fire power inside 50 – to their lowest half-time score of the season.

Maroochydore booted just three goals to the main break and all were against the run of play and which also included a Mitch Scholard set-shot on the half-time siren.

The Roos’ defence was resolute and despite the disbalance on the scoreboard, often rebounded Noosa’s attacking movements but the Tigers’ dominance in the midfield meant the task was often too much and Noosa continued to pile on goals.

Following the main break, the game entered a lull with neither side able to worry the scoreboard too much.

It wasn’t until young Tigers’ goal-sneak Will O’Dwyer curled his goal through ten minutes into the premiership term which broke the deadlock, extending their lead to 60-points where it was almost impossible for Noosa to comeback.

Noosa spearhead Ryan Jeffery was the biggest beneficiary of the Tigers’ dominance, booting a game-high four goals in the win while skipper Aaron Laskey and midfielder Tyler Stack were also influential through the midfield.

In the ruck, the battle between Noosa’s Connor McDonald and Maroochydore’s Jacob Simpson went the distance but McDonald’s work rate around the ground gave him, and the Noosa midfielders, the upper hand.

For Maroochydore, Samuel McKenzie was solid as was Lochie Laing.