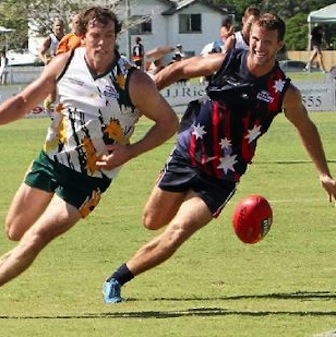 By Nic Falconer courtesy of the Mackay Daily Mercury

CITY held on in the heat of a real battle to overcome a resurgent Country in their Aussie rules clash at Harrup Park oval.

“It’s a big privilege to play on days like today so we are very lucky,” said Country coach Gary Downes.

“I spoke to the boys about that before the game and told them I needed some of them to sacrifice themselves for the sake of the team and it turned out to be a good team effort.”

The battle was won in the first quarter with the onslaught of goals by City, though Country held firm until the end.

City shot off to a quick start scoring 6.6 in the first quarter to Country’s 2.0 and the damage was done.

“I take my hat off to those Country boys, they really came back at us in that second half, but today is more about learning the meaning of sacrifice, and why we are able to live in this magnificent country,” Downes said.

“It is a special day for all Australians and the Anzacs went out and laid down their lives and if they didn’t do that maybe we mightn’t be here playing a game of football today.”

The thousands that came out to watch in the heat of the day must have agreed wholeheartedly as the respect shown in the minute of silence after The Last Post was only interrupted by the clicking of a small child’s thongs as she ran around the oval.

The national anthem was played soon after with a group of children, some as young as three years old, singing along, loudly and proudly.

“It was great to get 25 blokes who really wanted to play today and be involved. They are realising how prestigious it is for them,” said Downes.

City captain Tim Bone added: “It is an honour to play in front of the Diggers and it makes you think about what they had to do.”