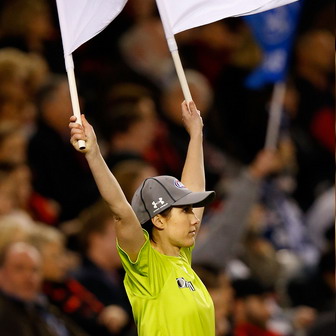 Queenslander Chelsea Roffey will make AFL history this weekend when she becomes the first woman to wave the flags at a grand final.

Born in South Australia, Roffey grew up in Brisbane where she took up goal umpiring in her final year at Ormiston high School.

Chelsea rapidly progressing to state level matches and in June 2004 she was elevated to the AFL, umpiring her first game between Brisbane and West Coast in August that year.

We caught up with a very excited Chelsea after her grand final appointment was announced.

AFLQ: How does it feel?

CR: It feels very surreal at the moment and I don’t think it’s even sunk in! Every now and again I think “cool, I’m umpiring a grand final” and I just think about what a great experience the whole thing is going to be.

It’s strange to be working towards something that you dream of for so long and to have it come true. You don’t know how to react when it happens.

AFLQ: What inspired you to take to up umpiring?

CR: I love footy.  From a very young age I was fanatical about the game and just wanted to be involved in it in any way I could. I saw goal umpiring as a way to be involved with the game I love.

I started out as a volunteer in my final year of high school and I guess it just evolved from there. Most people probably think there isn’t much to goal umpiring but there’s a real challenge to it in things like learning how to read the play and getting in position.

To be involved with some great games with magical skills on display and just to be metres and centimetres away from brilliant goals and contests on the line … It’s great fun.

AFLQ: When did you realise you had the potential to umpire at the highest level?

CR: I was doing state league in Queensland for about five years and towards the end of that period I had the chance to step up into the AFL.

I knew that they were starting to look at me and I realised I had a big opportunity. It was always in the back of my mind but when you go about your job in State league it’s not necessarily something you think you’re going to achieve

I couldn’t believe it when I had the chance to step up and do AFL.  I was just thrilled.

AFLQ: Do you have a set match day routine?

CR: I make sure that the routine is pretty much the same each week. I always make sure I get a good night’s sleep. I wake up in the morning have a leisurely breakfast and read the paper.

I get organised and get to the game a few hours before. I do a bit of stretching and warm up,  listen to a few tunes and get myself  mentally prepared for what the game is going to be like.

AFLQ: What about match day superstitions?

CR: I always wear the same pair of socks!

AFLQ: Has it sunk in what it means to be the first woman to umpire an AFL Grand Final?

CR: It’s starting to sink in. First and foremost my goal has always been to be a good umpire; that’s all I really care about.

This appointment is about my ability as an umpire and being assessed and scrutinised during the year based on my performances.

If that says to people that you can do your job regardless of your gender then that’s the important thing to me. I can understand what that means to women in sport and I hope that puts the right message out there.

Catch all the excitement of the 2012 Toyota AFL Grand Final live on Channel 7 from 9:00am Saturday with the big game kicking off at 2:30pm